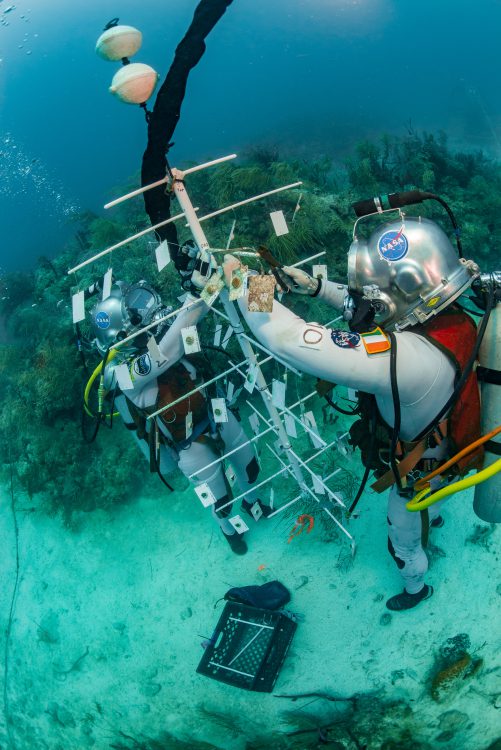 We have samples! Today, the EVA team of Matthias and Reid collected our first coral sample for the FIU marine science team. The EVA was just over 4 hours, and they did everything from reef exploration to identify specific species of coral for potential monitoring, to sampling previously tagged coral colonies, to doing follow-up work on the coral nursery trees that were built in collaboration with the Coral Restoration Foundation…which brings us to the Team of the Day! 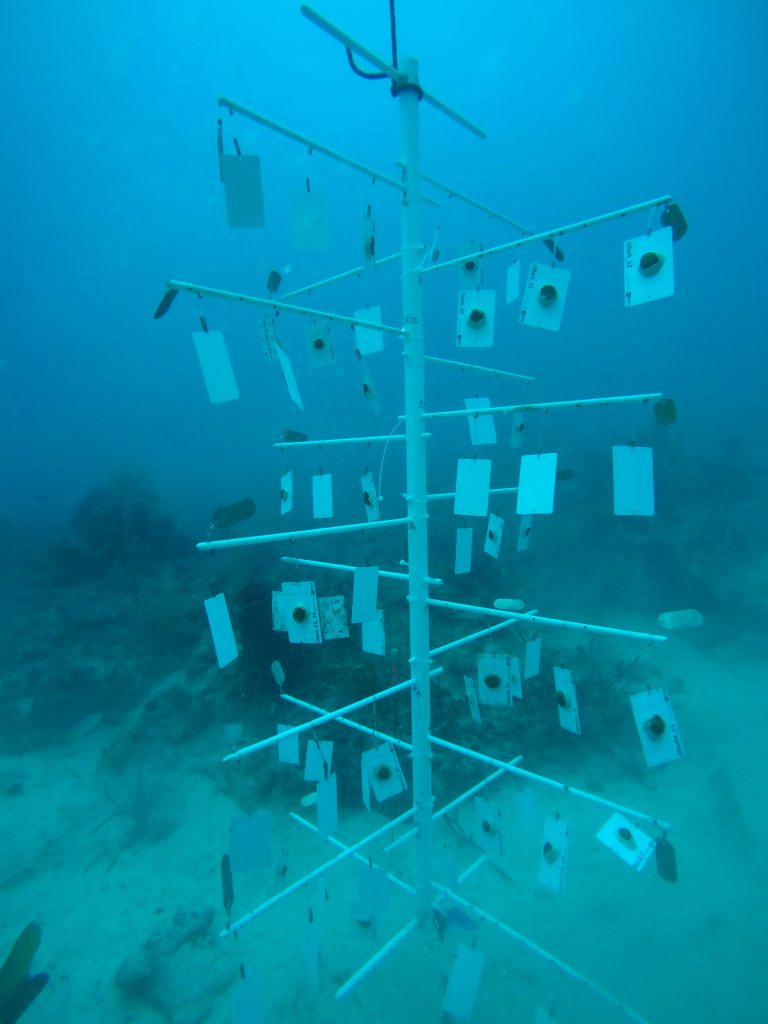 A constructed coral nursery tree, which will later be harvested for outplanting

The Coral Restoration Foundation (CRF), based out of Key Largo Florida, is a nonprofit ocean conservation organization working to restore coral reefs, educating others on the importance of our oceans, and conduct research to further coral monitoring techniques. This organization is dedicated to creating offshore coral nurseries and restoration programs for threatened coral species. These successful programs have allowed the CRF to take the lead in innovative nursery and restoration techniques that are implemented worldwide. At NEEMO 21, the CRF is teaming up with NASA and Florida International University (FIU) for the first time with a goal of setting up long-term coral nursery at the Aquarius Reef Base (ARB) site to support on-going research and restoration efforts. Initial research will include the comparison of growth, survival, and fitness of nursery corals grown at different depths. Future efforts will expand upon the foundation we establish during this year’s NEEMO mission to produce and grow additional generations of coral colonies for restoration and research. Ultimately, the coral colonies that are grown in the ARB nursery will be out-planted around Aquarius for long-term monitoring and throughout the Florida Keys to help restore the threatened reefs. 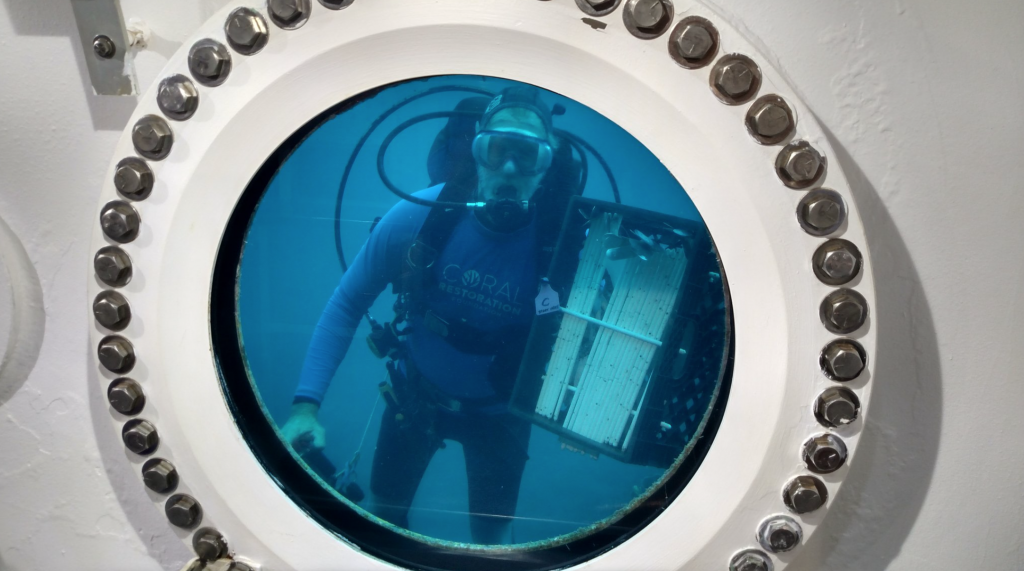 The task for our aquanauts is to construct the “trees” for the nursery, secure them to the seafloor bottom, and populate them with different coral species which will start to grow.  For us, it’s analogous to a “pioneering” EVA task.  Pioneering tasks are those related to setting up camp on the planetary surface, as distinct from the exploration science EVAs.

Since Mission Day 2, the crew has been working hard on their EVAs to construct and collect data from the nursery trees. The entire crew was very excited about working with the CRF as both a task that is analogous to planetary EVA, as well as a way to give back to a reef that has supported Aquarius for 21 missions to date. 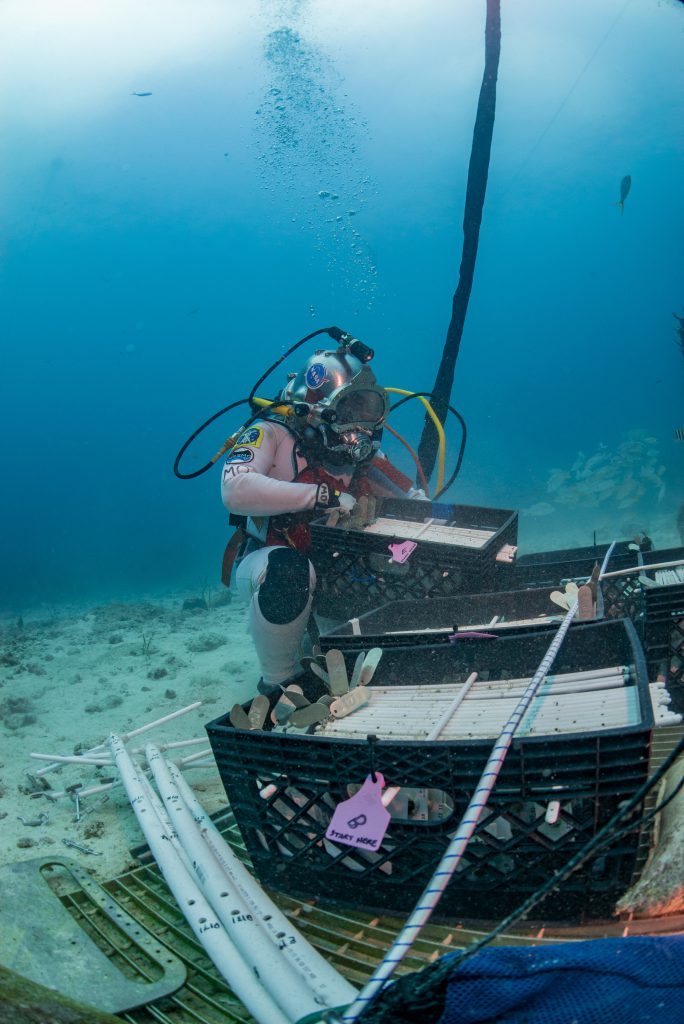 In addition to a very productive EVA, Marc and Megan were inside the habitat staying just as busy running through science objectives and manning the IV communication for the EVA.

“Another great day from beneath the waves. Amazing, challenging, engaging, mid-blowing and so many more words are what I would use to describe this experience!

Commander Ried Wiseman described this as being one of the best analogs that he has seen so far in preparation of astronauts for simulation quality and I would have to agree. The combination of effort from a crew that is working hard inside the Aquarius Habitat to the amazing team of scientists, engineers, CAPCOMs, mission specialists and operational planners is something to behold when you see it all come together! Needless to say not everything goes smoothly, but this is one of those areas where the operational “speed bumps” are taken into consideration and it is a fantastic to watch such a great team work in tandem to overcome them! This experience is my new definition of teamwork!

So, today was my first day as IV. I was the first “non-astronaut” trained crewmember who had the pleasure of sitting on console while my two crewmates Reid and Matthias were out on their 4 hour EVA (Extra-Vehicular Activity) exploration dive. So lets put a couple of things in perspective. This is a similar type of console setup that can be used in mission control when astronauts are doing spacewalks. There is data streaming in from every corner on multiple different screens. You are the “voice” link from the crew to “mission control” and in addition you are trying to keep abreast of multiple different data streams and timelines ranging from discomfort, operational efficacy and simulation quality. All of this data helps the science and exploration teams to devise better techniques and tools for spacewalks and missions on another planetary body like Mars.

Heres where the perspective comes in … You have a mission control room full of VERY highly trained scientists from multiple space agencies who do this for real with a space station 100 miles above the earth, an astronaut and an astronaut technology specialist in the water whom are both extremely experienced, multiple scientists who are counting on the data from the dive for coral research and restoration, new tools being tested for doing future spacewalks on Mars … and then you go and stick an Irish doctor directly into the data choke point for this entire operation and hope he can juggle all of the balls for 4 hours! This also became my new definition of drinking from a firehose!

Reid and Matthias did a fantastic job of sampling the coral and meeting the objectives for the Coral Restoration Foundation and FIU at both the Mercury Coral Nursery and the exploration part of the mission. This experience also gave me a unique and valuable perspective on the type of inputs needed when astronauts do spacewalks and just how valuable an analog that NEEMO is in the preparation of new techniques, technologies and procedures for a future mission. Onwards with our #JourneyToMars!” 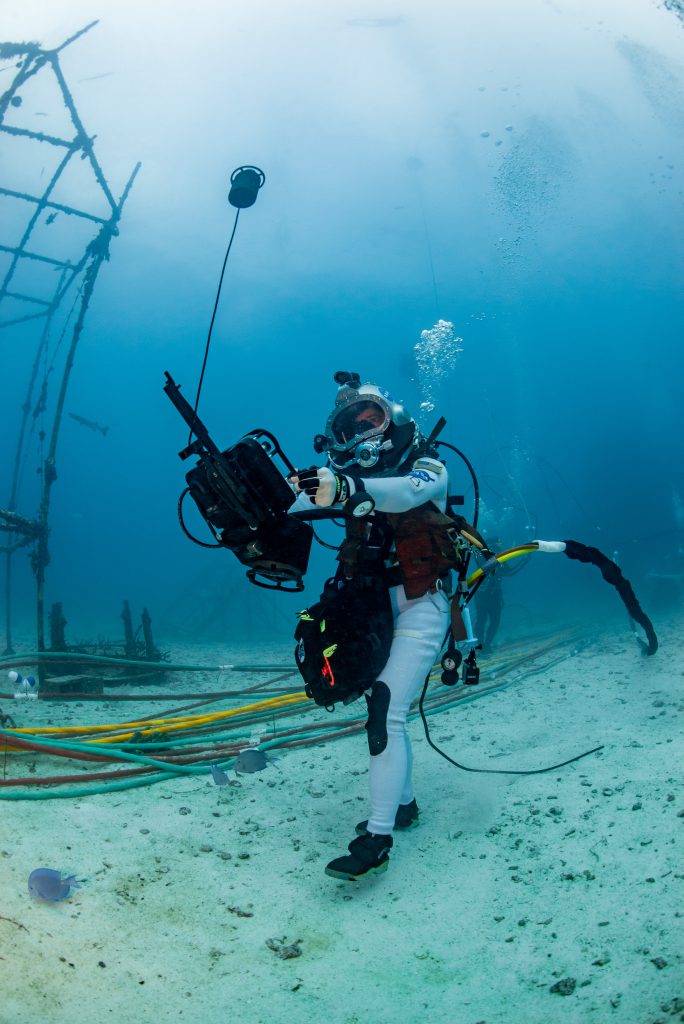 Megan Behnken on EVA navigating to a designated work site

As mentioned in the Mission Day 3 update, and like crew members in space, the crews’ daily schedules are scripted by Mission Control to ensure that all of the mission objectives are met.

“Time pressure – at the end of Mission Day 4, we are still stressing a bit from the perceived schedule pressure.  Our entire day is planned by the mission control team. They do their best effort to estimate how long each task will take us.  Much like on the space station, the learning curve for the crew is steep when you’re new…and right now, we are all new which means we are slow!  I can tell after a week or two of experience down here, we would be able to handle routine science with ease.  But right now, DNA sampling is tough, exercise setup is tough, even getting through meal time is tough.  Because of that, our efficiencies are lower than they could be.  As the day rolls along, a thin vertical red line on the schedule shows us the actual time.  That red line becomes the pace car down here as it does on the space station.  Completing a task before the red line catches you feels great, but watching the red line track past your current task means you are behind and chasing that line becomes a burden.  To date, we’ve done alotta chasin’….” 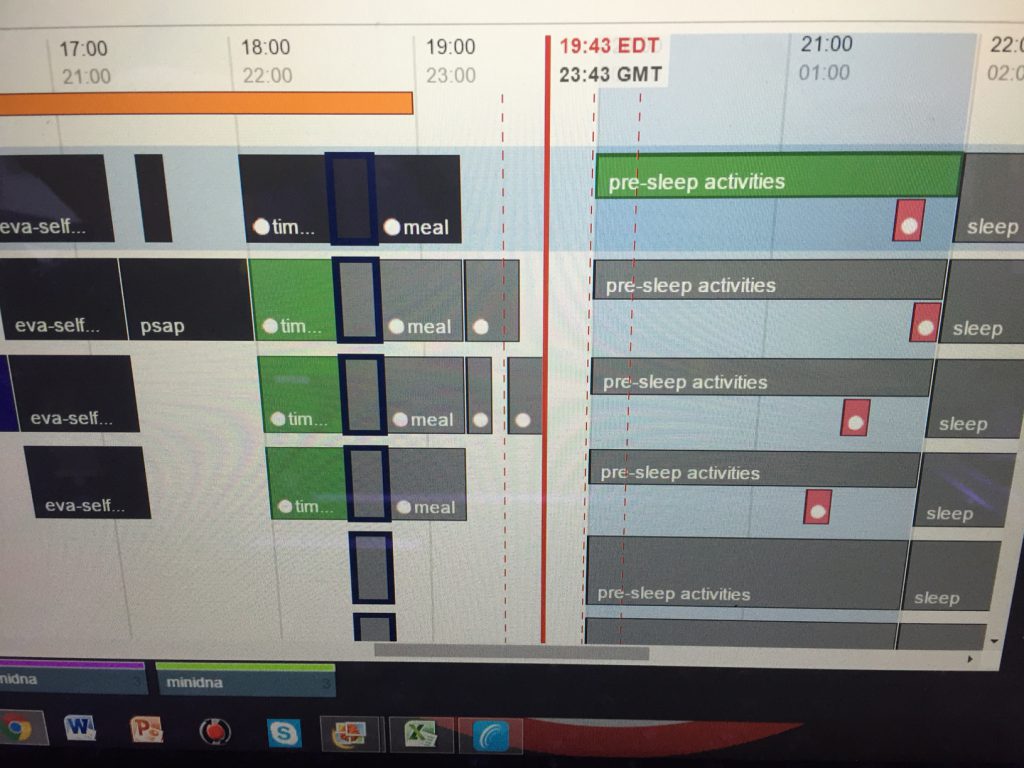 While the extreme environment and remote operations lend to a space-like environment, the incorporation of time pressure, delayed communication, EVA operations, and team coordination (among many other things) are the features that make NEEMO such a convincing analog for space exploration!