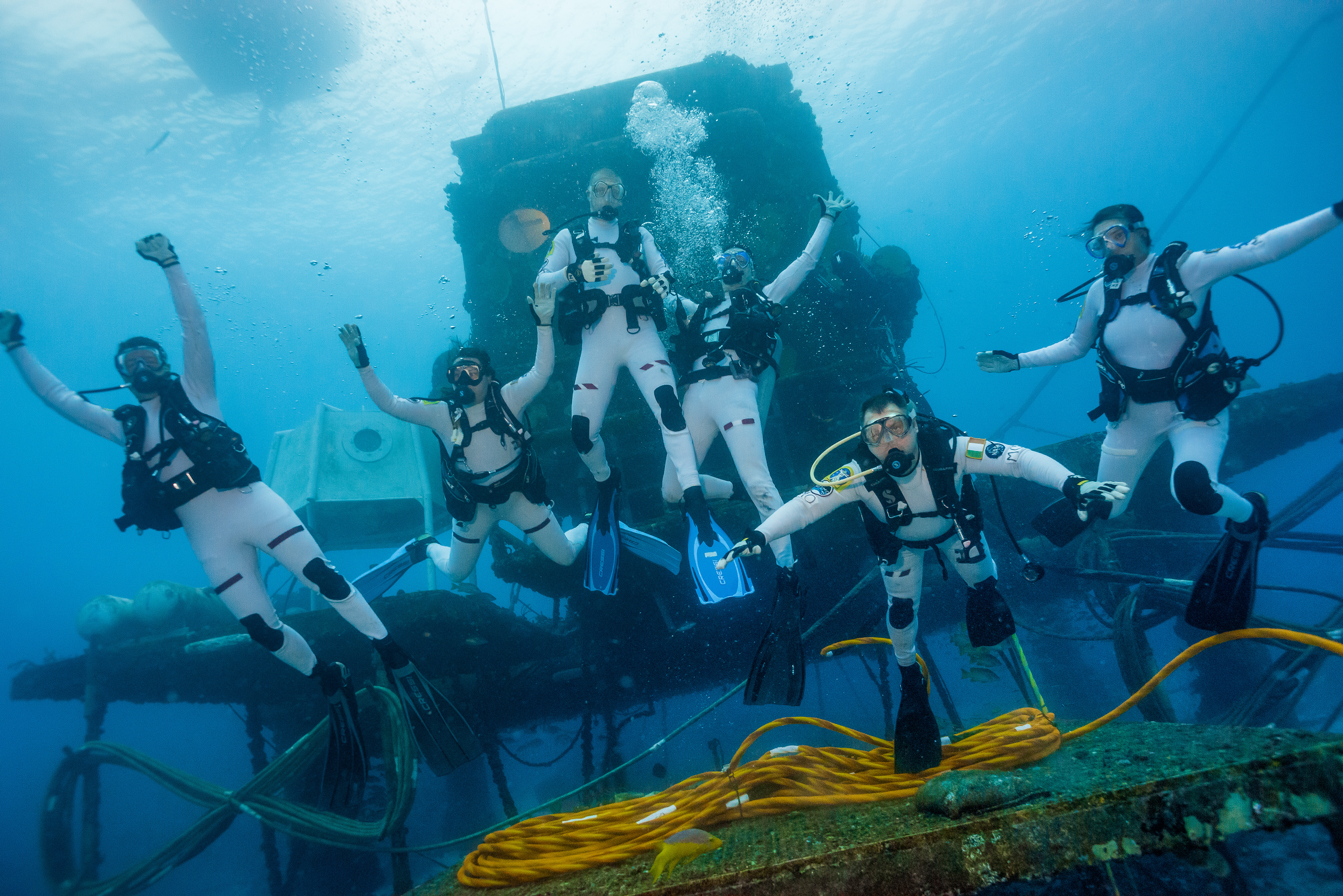 NEEMO 21 splashed down today at 10:28 AM ET. Even with grumbling skies and a few downpours, the crew was ecstatic to hop on the boat and head out to the Aquarius habitat after a 3-day weather delay. 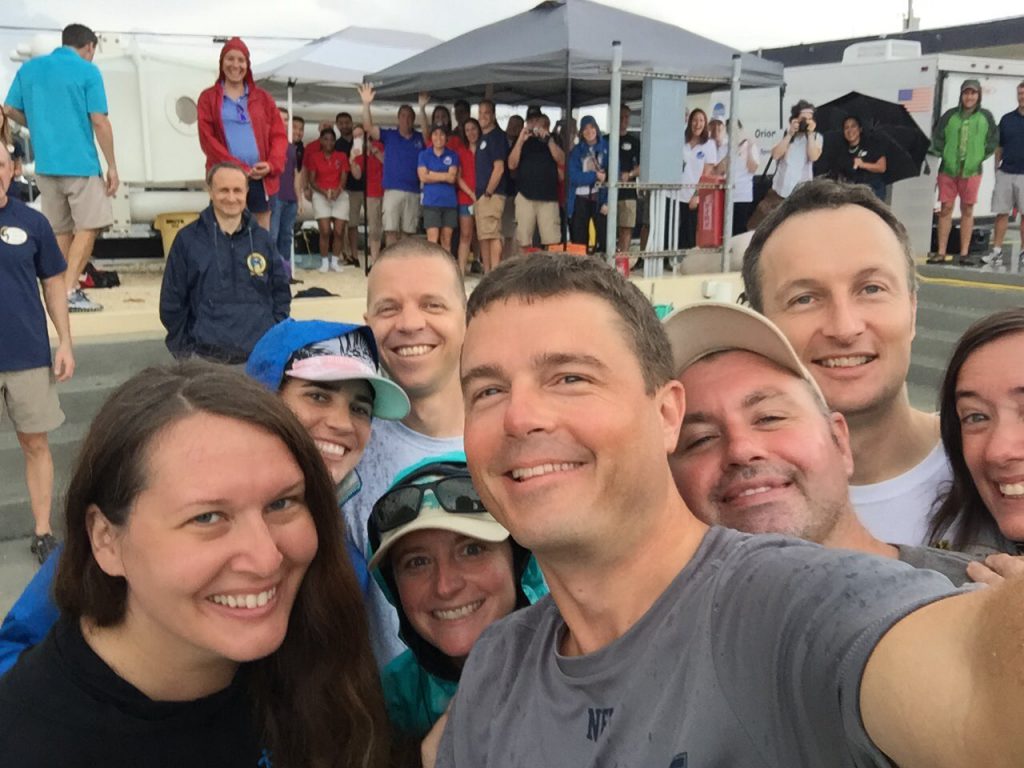 NEEMO 21 crew, research, and support teams ready to kick off the mission!

After a few rounds of photo opportunities in our shiny white wetsuits (well, some are shinier than others), we all hopped in for a round of in-water crew photos before the saturation mission began. The thunder rolled and the skies looked ominous in the background, but the calm sea state and the excited mood of the crew overcame the dreary weather. 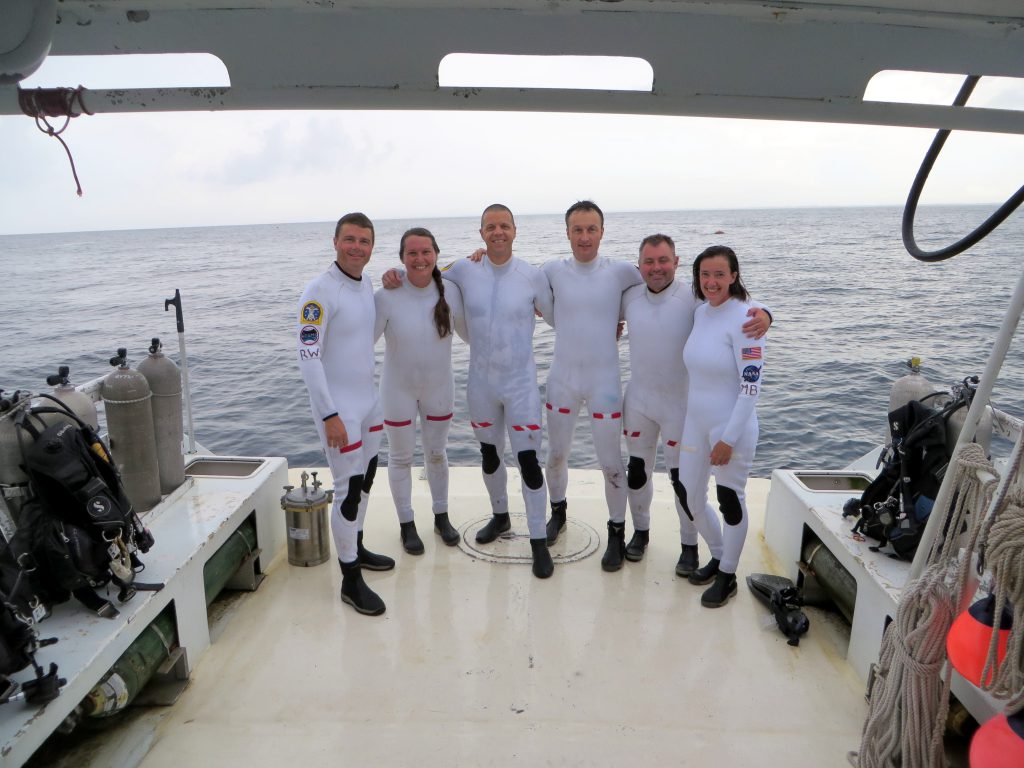 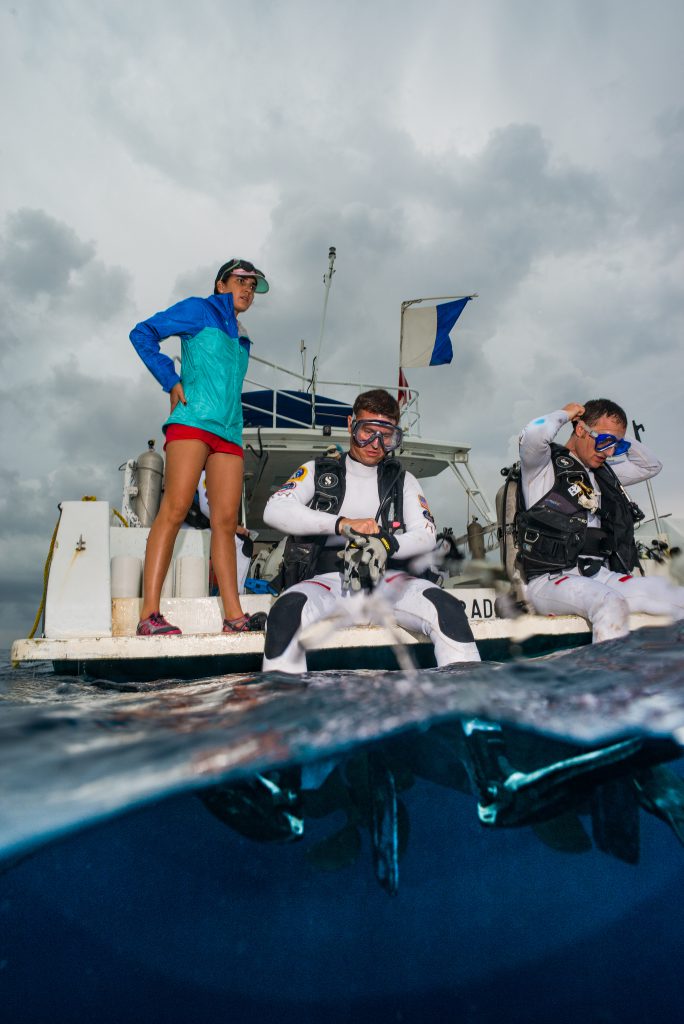 Our fabulous photographer, Karl Shreeves, got some great shots of all 6 crew members (combining the two 8 day missions). It was a lot of fun to have everyone together one last time before the first crew climbed into the habitat! After wrapping up our photos, it was a round of handshakes and big hugs as Noel and I wished our crewmates the best of luck. As we swam away from the habitat, we could see the crew members settling into their new living quarters through the habitat windows – so excited for them, but also anxious to return in 8 days to switch with Reid and Marc for our own 8 days in saturation! 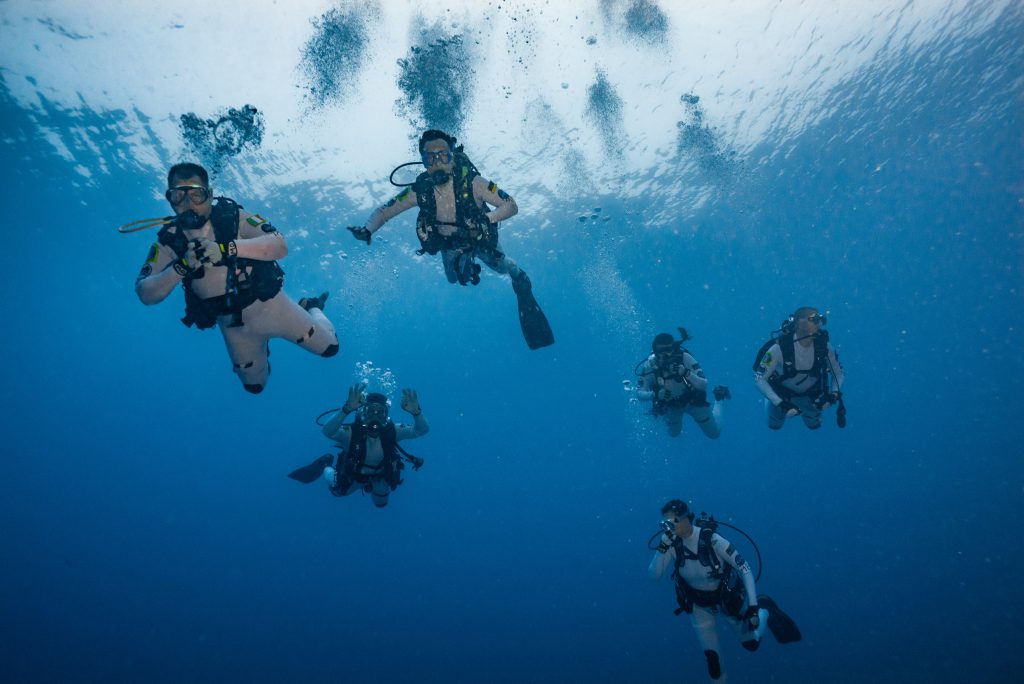 The crew descends to the habitat for splash down 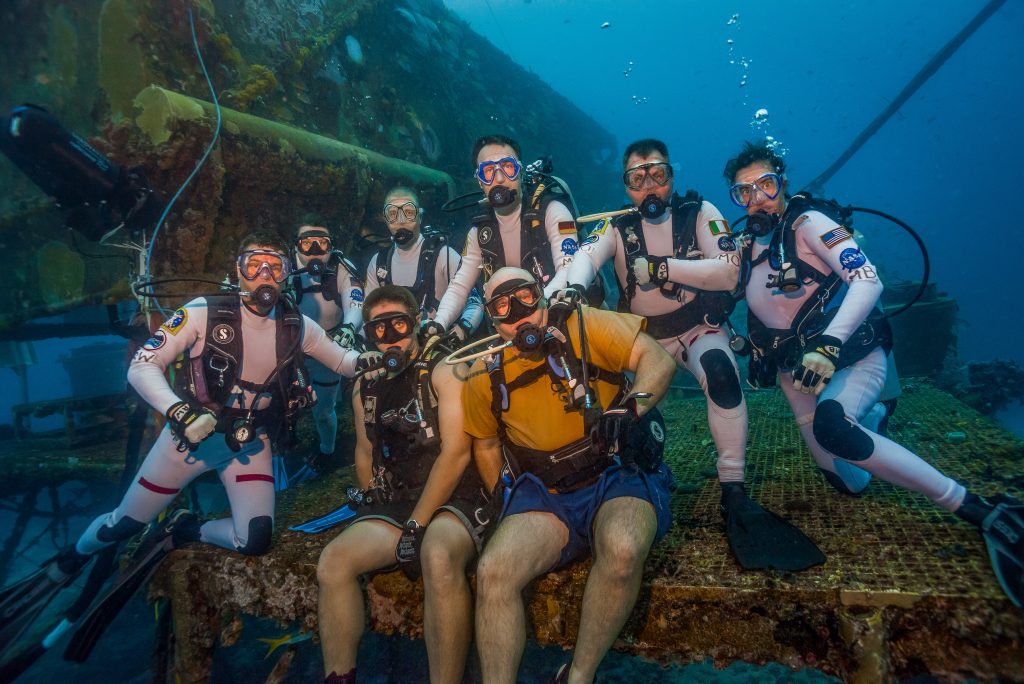 As Noel and I returned to Mission Control Center at Aquarius Reef Base, the first saturation crew settled into their new home.

“Since we said goodbye outside the hab (which was more emotional than I expected!), we have been incredibly busy. I am always amazed how frustrating yet exhilarating it is to experience a completely new environment. This feels very similar to Day 1 on the space station. There are so many incredible views outside I can’t decide between working and taking it all in.

After coming into the hab, we had a quick safety briefing from Sean and Hank. Emergency procedures are simple but critical. Fire and contaminated air are the biggies. Loss of power is not as critical, but it starts the clock on our resources. It took about 20 minutes to go through the specifics.

After that, Marc and I rehydrated some Mountain House food. Chicken and rice as well as good old chili mac. The four of us split those two as a trial. Delicious! No doubt I can live off that for as long as needed.

Soon after lunch, the Hololenses came down from topside. Megan and I donned them and began the tedious chore of unpacking. Initially we were frustrated with the gear but we soon learned the nuances and it became an effieicnt system. One humorous thing – in the tiny habitat, any time Megan would make a Hololense gesture to close a window or complete an activity, it would execute her gesture in my Hololens as well. I learned to adapt to this but it made for some funny first moments!

Sean and Hank prepped the helmets for our first dives. We did quick 40 minute excursions in 2-man teams to learn how to exit and enter the hab as well as umbilical management. The time outside was spectacular. We all were able identify the four primary corals we are looking for this mission. Very easy to spot the Agaricia humilis. Following the first excursion with Matthias, we watched as Megan and Marc went out, which allowed us to learn the radios and laptops that we will use to guide them on their ‘space walks’ in the coming days. Overall, the operations went far smoother than expected.

Another round of Mountain House for dinner. We were all extremely hungry and you could hear a pin drop during dinner… No witty banter, just food consumption. After dinner, most of us called home to say hi to our families. Hank turned the outside lights on after sunset and the world outside came alive. We had huge fish, tiny fish, and unidentifiable fish all coming to say hello. It was impossible to pull oneself away from the view ports to head to bed. I’m sure this will all become the norm soon, but for now it is sensory overload and it is awesome!”

Day 2 kicks off research for NEEMO 21, and a fun surprise for the entire crew! Updates to follow as we plan to blog each mission day moving forward.