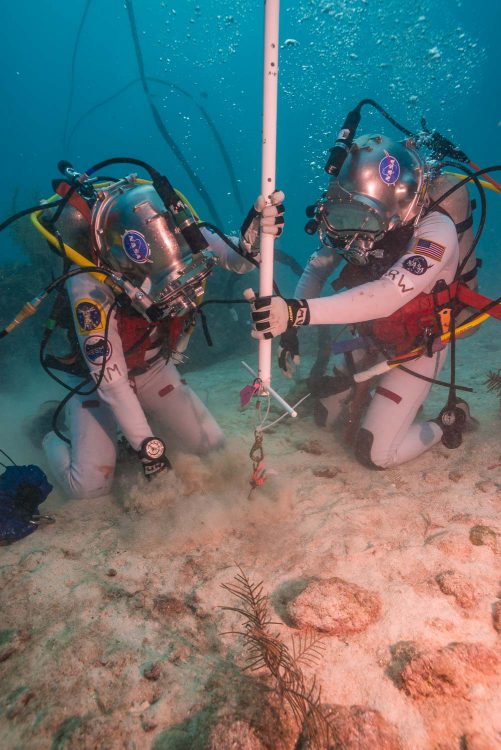 It’s official! As of 10:28 AM ET on Mission Day 2, Reid Wiseman, Megan Behnken, Marc O’Griofa, and Matthias Maurer are officially Aquanauts after having lived underwater for 24 hours. On that note, both Megan and Reid are now the 49th and 50th Aquastronauts (meaning they are aquanauts who have also been in space). Congrats to the crew! 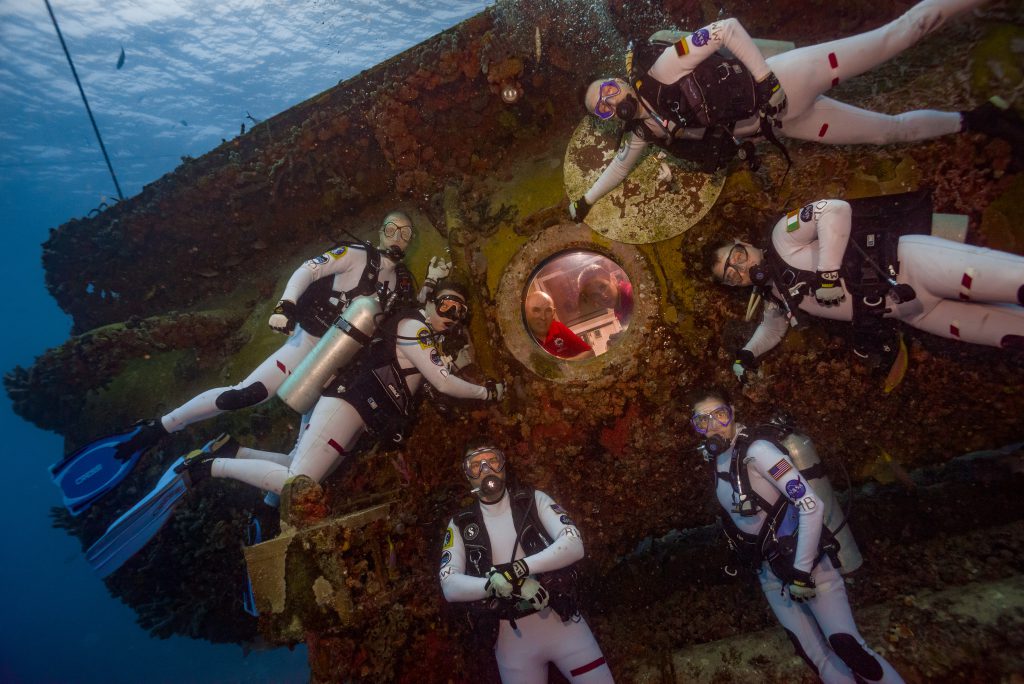 Mission Day 2 was jam-packed with science and operational objectives, as every day is planned to be for this mission! The crew started their in-habitat and EVA objectives, including the DNA sequencing, sensorimotor testing, nutritional assessment, optical communication testing, and coral nursery tree construction on the Mercury (shallow) site. 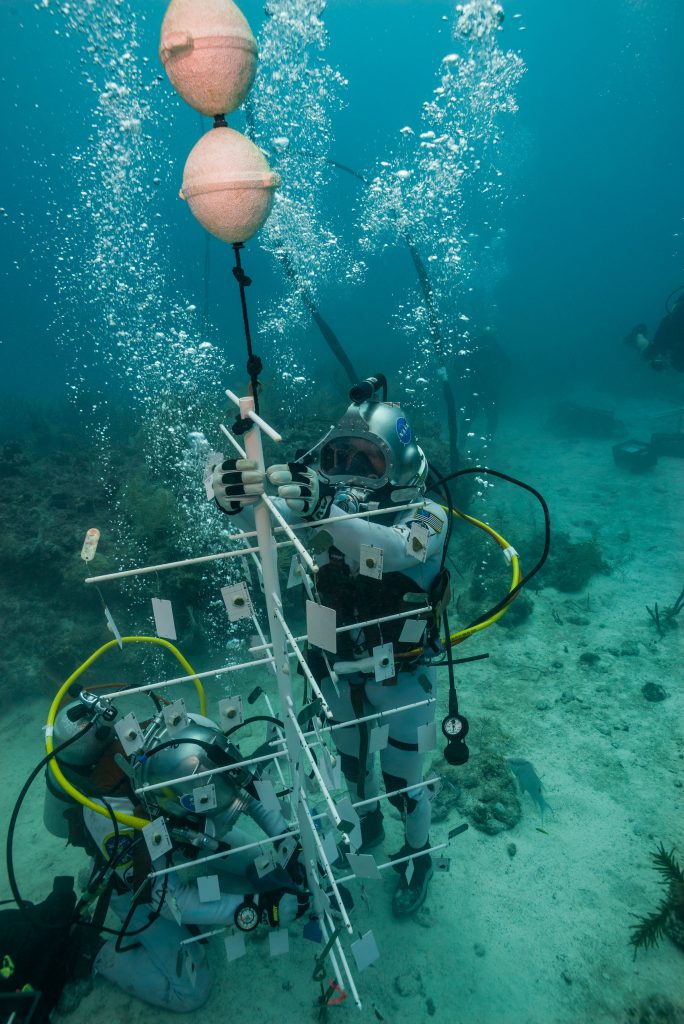 A Coral Restoration Foundation tree under construction by Maurer and Wiseman

Throughout the mission, we will provide details on each of the science and operational objectives in each blog post as a ‘Featured NEEMO 21 Team of the Day’  – first up is optical communication testing!

For pioneering missions to Mars, establishing reliable and robust communication and data links will be one of the first and most important tasks for the crew to accomplish. Not only is communication between crew-members vital for team coordination and performance, it is necessary for all surface operations, from deployment of habitats to science-based exploration on planet surfaces. However, traditional radio frequency communication systems require large amounts of power and are bandwidth-limited (low data transfer). A solution to improve these communication issues is to utilize Free-Space Optical Communication (FSOC) systems that have the potential to allow for more reliable and faster data and voice communication links between the habitat and crews conducting extravehicular activities (EVAs). FSOC also requires less power for transmission, thus potentially offering battery and weight reductions on EVA suits. Although FSOC is limited in distance to a few hundred meters and requires a direct line-of-sight between transmitter and receiver, these systems can transfer significantly more data than traditional radio. 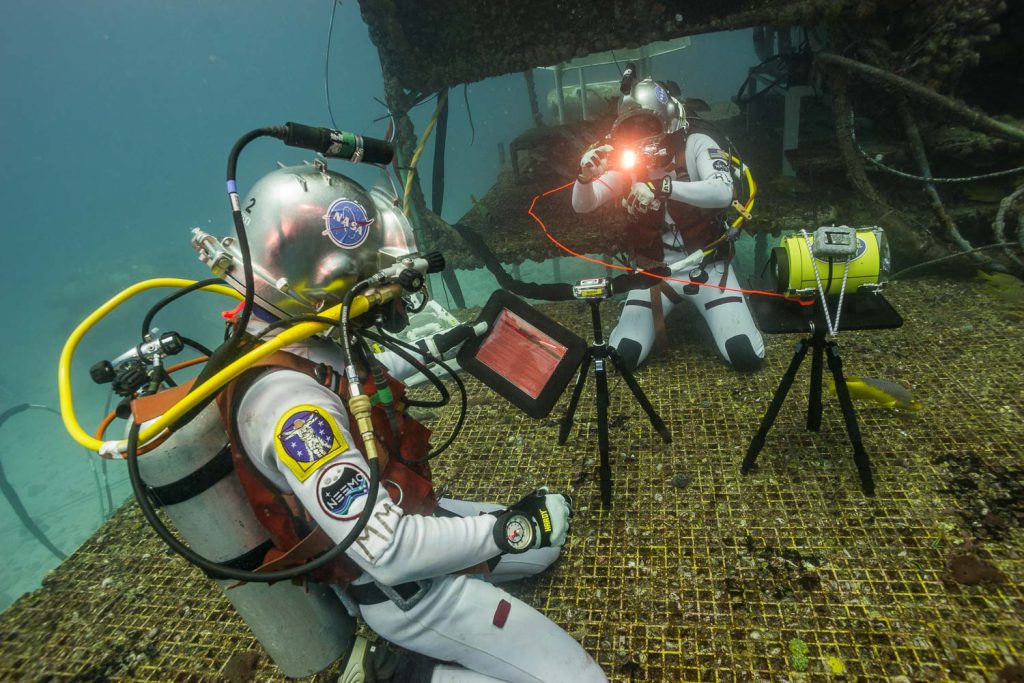 The team Embry-Riddle Aeronautical University and Micro Aerospace Solutions has designed an FSOC system for evaluation for deployment and evaluation during NEEMO 21. Results will not only support recommendations for utilizing FSOC for surface operations on Mars, but could potentially lead to new applications for underwater operations here on Earth for the US Military and oceanographic researchers. 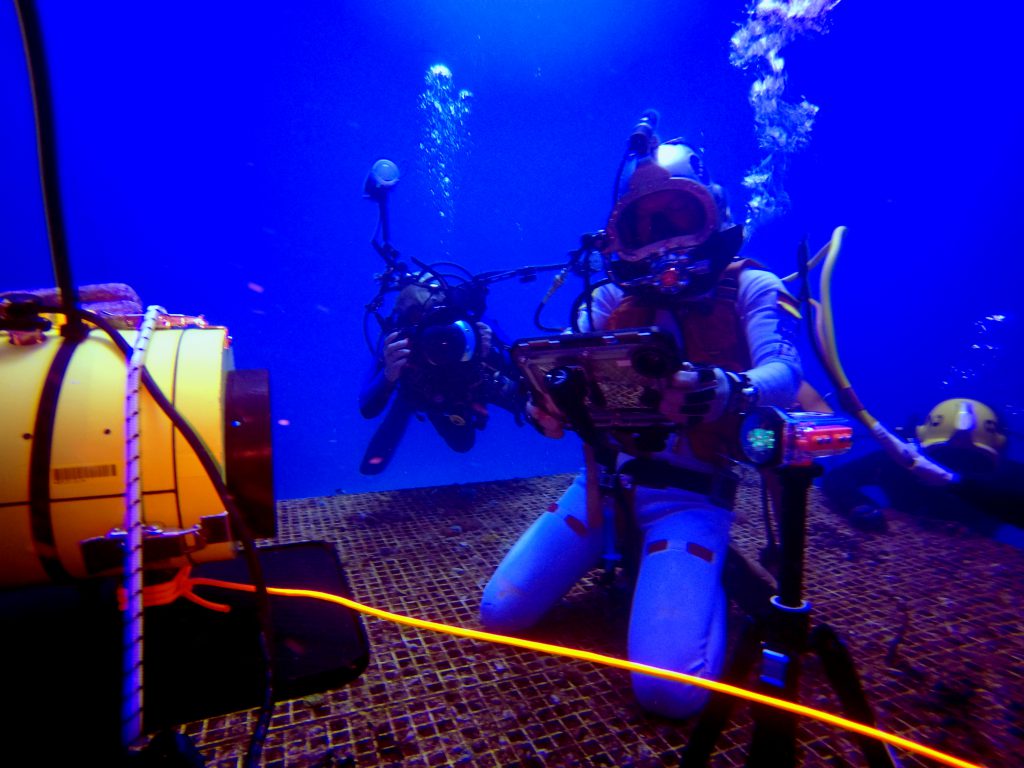 Maurer testing optical comms while being photographed by Karl Shreeves

In addition to working through the objectives, the crew had a surprise visit by the Chief of the Astronaut Office, Chris Cassidy. Chris had a chance to tour Aquarius Reef Base, followed by two dives at the Aquarius habitat to see the in-water operations and say hi to Megan, Reid, Matthias, and Marc. Everyone was excited to have him on site! 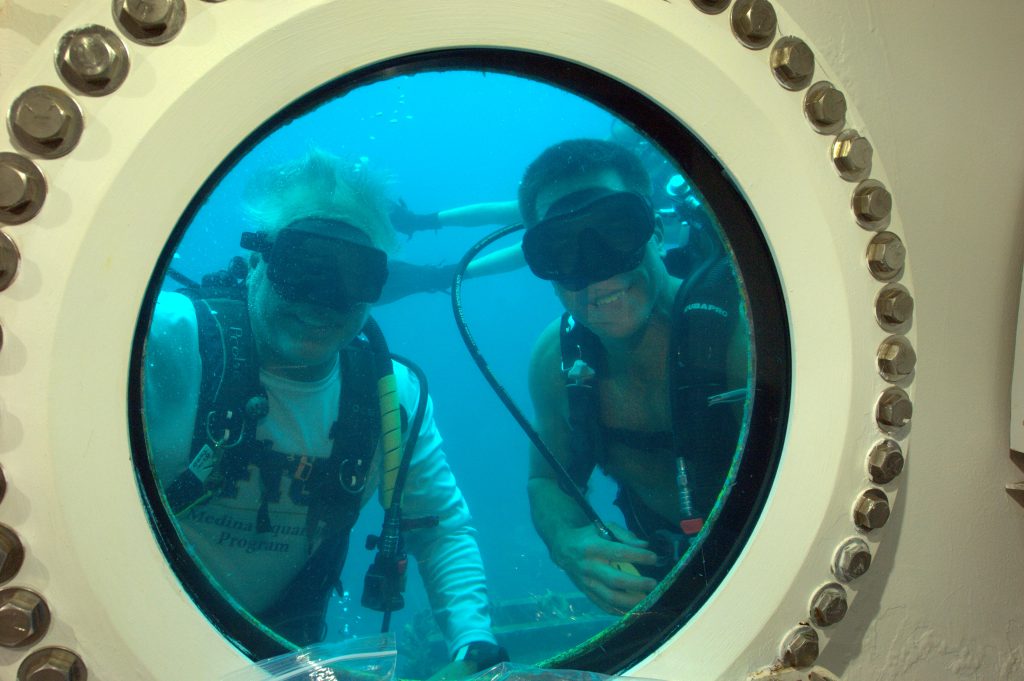 The other surprise for the day was Noel and I diving into the habitat for a crew photo, to say hi to our team, and….drumroll…a link up with the International Space Station! Ocean to space, we swapped stories and other-worldly views with astronauts Kate Rubins, Jeff Williams, and Takuya Onishi (all NEEMO aquanauts from previous missions). They took us on a ‘swim’ through the ISS, turning the cameras around in the cupola so we could see the Pacific Ocean from space. I have to admit, I had goosebumps and was a little choked up to see Mother Earth from their view, with fish swimming around behind the laptop screen. We were all grinning ear to ear as we sent our farewells and best-of-luck wishes to the ISS crew from underwater! 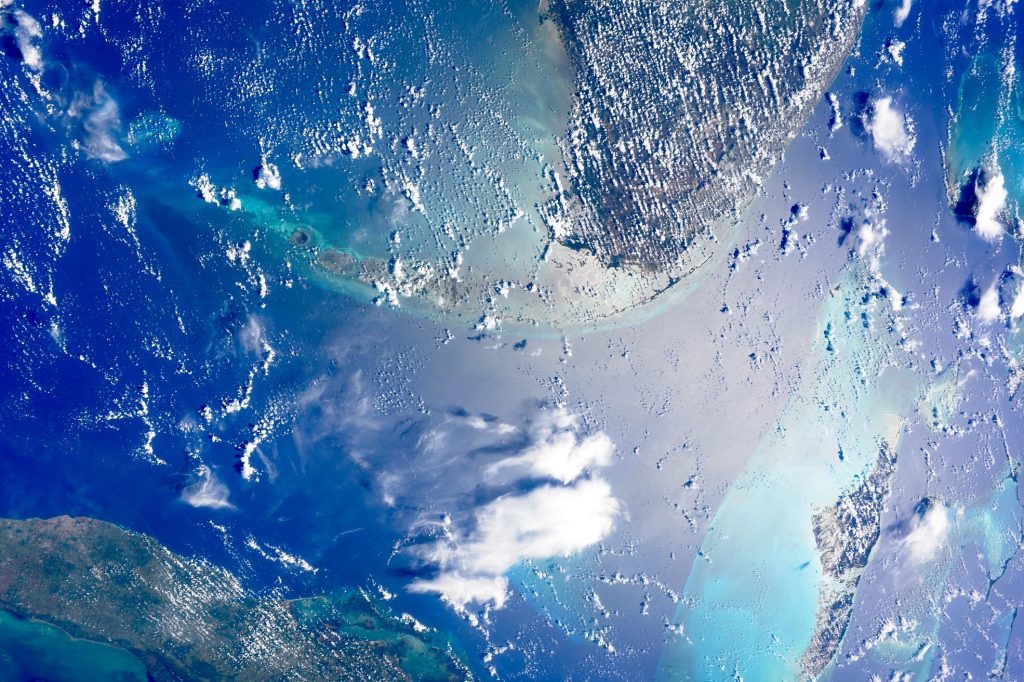 From the crew below, we received an update on the first full-day in saturation.

“Day 2 started out very busy … at approximately 4am …

I had set my alarm for 5:50am as I was going to be the first up the following morning to set up for the VEGA Telehealth monitoring. I had set up the equipment the night before but murphy’s law says I should trust but verify!

In the middle of the night my alarm clock actually falls off my bunk to the floor behind the air filters, and I have visions of it going off at 6am and the entire crew cursing me out! This was not the way I wanted to spend my first morning in Aquarius so I stumbled around in the dark for 15 mins cursing myself until I found it! Success!

We started off the morning by each of the crew being monitored on a wireless enabled state-of-the-art telemedicine solution. All of the equipment is linked to the wifi network of the habitat and the data transmitted to a cloud server where it can be viewed by a topside medical officer in mission control. This provides a far greater level of awareness of the crew and their needs from a medical and performance aspect. The lessons learned from the crew help improve the next iteration of the system with a potential application for long duration spaceflight but will also have significant impact on improving the system for conventional medicine application as well.

Thank god the entire system worked the first time and we had to do almost no troubleshooting. I was able to breathe a sigh of relief as I had to pull each weary crewmember out of bed to do their first round of telemetry. One of the key pieces of equipment that we are using on this mission is the ZOE Fluid Monitor. This monitor works on the basis of basis impedance and provides an objective fluid or hydration level for each crewmember. This is really key as we progress forwards throughout this operationally intensive mission as it is very easy to dehydrate, especially with 4 hour long dives as extra-vehicular activities (spacewalks) on the seafloor where you cannot drink at all. This is just another of the measurements that we can introduce to help monitor and improve the overall health and performance of the crew.

Im running a little thirsty tonight so Ill be sure to drink up before my EVA tomorrow.

The mission is running swimmingly, so to speak! Stay tuned for Day 3 updates…