Exoskeletons have the potential to improve the mobility of individuals who suffer from a variety of gait pathologies, such as stroke victims or those with lower-body paralysis. We have been researching using these powered exoskeletons to improve mobility for several years, and are continuing to do so with our latest exoskeleton, Quix. 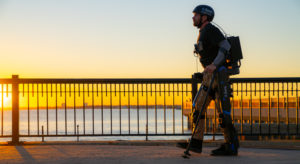 Quix is a powered exoskeleton that IHMC developed to provide increased mobility and independence to people with lower-limb paralysis. The device allows users to stand up and walk through a variety of environments, including up and down stairs and ramps, and across both flat and bumpy terrain. It is the fourth exoskeleton prototype developed from the ground up by researchers and engineers at IHMC.

Powered actuation at the hip (both flexion/extension and adduction/abduction), knee (flexion/extension), and ankle (plantarflexion/dorsiflexion) provide smooth and natural walking motions. These eight actuators enable the device to exhibit a wide variety of movements, utilizing a combination of actuation in both the sagittal and frontal planes. Each actuator weighs about 2.5 kg and can achieve a peak torque of 200 Nm and peak speed of 7 rad/s. The exoskeleton is powered by two 6S lithium polymer batteries that supply a maximum operating time of approximately half an hour of heavy usage. These batteries are housed in the backpack and can be hot-swapped to allow for extended run times.

Each actuator houses its own required electronics, including a motor driver and logic board. The actuators in each leg are daisy-chained to each other by the power and data lines that originate in the backpack. The software control algorithms are dependent on commands from the pilot and feedback from the exoskeleton’s sensor suite. A set of push buttons and an LCD screen on the crutch transmits commands, allowing the user to select different behaviors such as sitting, standing, and walking at different speeds on level ground, slopes and stairs.

Quix is designed for people like Mark Daniel, co-creator of IHMC’s powered exoskeletons. Mark was paralyzed as the result of an automobile accident over a decade ago. He has been working with IHMC since 2010, helping us develop and test our devices. In 2016, Mark piloted IHMC’s Mina v2 prototype at the 2016 Cybathlon and took home the Silver Medal.

Designer, evaluator, and user representative, Mark was born and raised in Pensacola. As a young adult he graduated high school early and pursued a career in ironwork, first going to trade school for diesel mechanics, then learning how to weld and fabricate. In 2007, at eighteen years old, Mark started his career and began planning his next steps. Working long hours in risky conditions was exciting at first, but after five months the work took its toll. He fell asleep driving home, flipping his SUV several times, and awoke in the ICU of a local hospital. After learning of his paralysis, he set out to regain his independence.

In 2020, IHMC competed in Cybathlon and in Toyota Mobility Foundation’s Mobility Unlimited Challenge, two unique championships in which people with physical disabilities compete against each other to complete everyday tasks using state of the art technical assistance systems. Both the events were held remotely, with Mark Daniel piloting the Quix mobility device in each competition.

The Mobility Unlimited Challenge focused on fostering radical improvements in the mobility and independence of people with lower-limb paralysis through smarter assistive technology. IHMC was one among the top 5 finalists in this competition.

Cybathlon 2020 was an international competition where users with disabilities competed in their respective disciplines to promote and demonstrate various assistive technologies. IHMC participated in the Powered Exoskeleton discipline, where we completed the course in under 7 minutes.

The first task of the Mobility Unlimited Challenge was a self-selected task in which IHMC demonstrated the use of the Quix device through a real-world scenario. The video demonstrates Mark traversing through uneven ground and slanted pathways, sidestepping, and climbing stairs. He can also be seen reaching into overhead cabinets, opening doors, and utilizing machinery from a normal standing posture.

The second task of the Mobility Unlimited Challenge was a common task in which IHMC demonstrated the Quix device’s utility and feasibility in a day-to-day scenario. In this video, Mark can be seen donning the device, navigating obstacles in a typical indoor environment, walking through doors, stepping onto and riding a bus, climbing stairs, and doffing the device. All of these tasks were done while transporting an object (a wallet in his pocket).

The third task of the Mobility Unlimited Challenge was a cluttered environment task. In this video, Mark (piloting the Quix device) is seen completing a timed race with competition-specified obstacles and requirements. First, he navigated over a thick, unstable rug, after which he sat down on a regular sized chair. He then picked up a laptop bag (which he carried through the rest of the course), stood back up, and started walking. He stepped over a large obstacle and then side-stepped through a tight space. He then did a slalom around closely spaced obstacles and reached the finish line.

For the Exoskeleton race the user had to do a sequence of courses such as sit, stand, stacking cups, slalom, rough terrain, stairs, tilted path, ramp and door. The best timing and scores out of the three runs was used to decide the winner and IHMC scored 4th place in the competition.

Mina v2 was developed for Cybathlon 2016, which featured a new actuator design initially developed for the Grasshopper exercise device. This exoskeleton featured powered ankles, the use of which we are exploring to develop faster and more stable walking than previous versions.

The X1 and Mina v1 powered lower extremity exoskeletons were jointly developed by NASA Johnson Space Center and IHMC. The focus of this collaboration was to develop a robotic device for a range of applications, including mobility assistance for abled and disabled users, rehabilitation, and exercise. The robot features torque controllable actuators at the hip flexion/extension and knee flexion/extension and passive joints to allow for hip ab/adduction and hip internal/external rotation. The powered joints are capable of variable impedance, ranging from zero impedance for transparent mode to high impedance for stiff position control. The links of the exoskeleton can be adjusted to the user’s body size such that the powered joints are co-located with the user’s joint, creating an anthropomorphic structure.