Dr. Michael Turner makes a “big bang” in the world of theoretical cosmology. Translation: He’s an expert on the universe—what it’s made of, what’s in its future, and how it came to be.

Turner is the Rauner Distinguished Service Professor and Director of the Kavli Institute for Cosmological Physics at the University of Chicago. From 2003 until 2006, was Assistant Director for Mathematical and Physical Sciences for the National Science Foundation. He is the recipient of numerous awards and prizes, and he is a Fellow of the American Association for the Advancement of Science (AAAS). 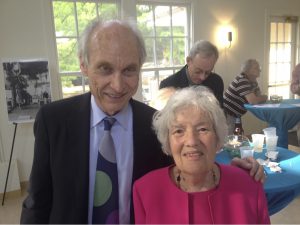 Michael Turner and Vera Rubben, who recently passed away.

Turner is most well-known for having coined the phrase “dark energy” in 1998, which he calls “very, very mysterious stuff.” Thought to comprise 70 percent of the universe, dark energy is responsible for both the expansion of the universe and the increasing speed at which that expansion is occurring.

“He [Turner] is able to explain the deepest issues in cosmology with a rare clarity and elegance,” says IHMC Director Ken Ford. “His research focuses on the earliest moments of creation.”

More information on Turner can be found here: https://kicp.uchicago.edu/people/profile/michael_turner.html and here: https://en.wikipedia.org/wiki/Michael_Turner_(cosmologist).

Turner’s 2011 IHMC lecture, “The Dark Side of the Universe,” can be viewed here: . Turner was also a guest on STEM-Talk for an earlier episode for his interview on the discovery of gravitational waves.

00:37: Ken calls Dr. Michael Turner “exactly the right guy to talk to about dark energy and dark matter. After all, he coined the phrase dark energy. He is able to explain deepest issues in cosmology with a rare clarity and elegance.”

1:04: Ken pays tribute to Vera Rubin, who passed away on Christmas Day. She confirmed the existence of dark matter and transformed modern physics and astronomy.

2:24: Ken asks for feedback on STEM-Talk and reads 5-star iTunes review from BobRXUF: “With all of the garbage we are bombarded with, listening to STEM-Talk reminds me that there is higher intelligence, the hope for mankind.”

3:35: Dawn and Ken introduce Michael and talk about his background.

4:39: Tom asks Michael to give listeners the big picture about the structure of our universe and explain how we stumbled upon the phenomenon called dark matter and dark energy?

5:14: Michael explains that a half of one percent of the universe is in the form of stars. The other 99.5 percent is dark.

6:29: Michael talks about how dark matter matter provides the cosmic infrastructure of the universe.

7:45: “Our universe,” says Michael, “has really been a battle between the two dark titans: dark energy and dark matter.”

9:49: Michael explains that’s it’s the stars that give off energy and it’s the atoms we’re made of. “We’re the tip of the iceberg. We’re the special stuff.”

11:25: Tom asks Michael what was the original evidence for dark matter and dark energy and who were the people who made that discovery?

13:20: Michael describes how Vera Rubin, a scientist working at the Department of Terrestrial Magnetism at the Carnegie Institution of Washington, was able to confirm dark matter at work in our own galaxy.

15:06: Tom asks if it’s dark matter that holds things together and makes the clock, the universe, tick?

19:40: Michael talks about research into “neutralinos,” particles that scientists speculate are left over from the Big Bang. “We’re in the midst of this detective story.”

21:24: Tom asks if the facilities and equipment exist to solve the mystery of the neutralinos and the dark-matter particle?

24:55: Dawn wonders if our understanding of dark matter and dark energy continues to advance, what future applications might arise from this knowledge?

25:21: Michael explains that if scientists are able to verify the existence of the neutralino, “it would be the first evidence of the super string theory, which unifies all the forces—a very, very bold theory that says there may be additional dimensions in space-time.”

27:20: In continuing to answer Dawn’s question, Michael says, “If history is any guide, any time we understand nature a little better, there will be spin-offs and practical applications that change and improve the way we live.”

27:43: Tom asks Michael to talk about dark energy and the continuous expansion of the universe.

28:54: Michael shares how two teams discovered in 1998 that rather than slowing down, the expansion of the universe is speeding up, suggesting it’s back to the drawing board on the ultimate fate of the universe.

30:18: Michael talks about what he describes as the most profound mystery in all of science: that gravity can be repulsive rather than attractive.

32:48: Michael refers to a theory that could prove to be even grander than Einstein’s. This new theory says that “as the universe thins out, after expanding for 15 billion years, it starts to speed up.

35:27: Tom asks about Congressional funding for the National Science Foundation research and Turner explains that almost every country on earth is grappling with funding allocations for science.

42:22: Michael talks about the James Webb Space Telescope (JWST), which he describes as big and bold and the kind of project that only the U.S. can do.

43:17: When Dawn asks Michael what led him to become a cosmologist, he talks about how great high school teachers led him into science.

43:51: Michael encourages young people to pursue careers in science. “Just about every challenge that our country and our planet have involves science…trying to understand the secrets of nature and solve the mysteries of mankind are really, really exciting. The career opportunities are good.”

46:3: Tom talks about getting his first telescope when he was 12 years old and how that was a gateway into science.

47:19: Dawn recaps the “mind-boggling statistics” Turner shared in the podcast, staring with 99.5 percent of our universe is dark.

47:38: Ken talks about the great turn of phrases Michael used during the podcast, such as when Michael referred to the evolution of the universe as a “battle between two dark titans.”