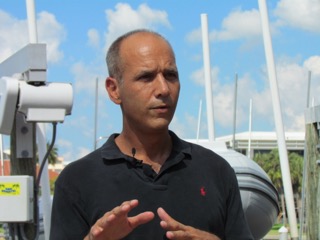 The day that a tree can talk—telling you about its ancestry and physical composition, and the air it breathes—is the future that David Fries envisions.

“Rather than sit in a classroom where you have representations of a tree on a white board, you are actually in proximity of the tree and can see visualizations of its chemistry, biology and sustainability,” Fries said.

In practice, this means that a mobile device could see a tree and then start tracing the flow of nutrients from its roots to its branches.

This “fusion of education and entertainment,” Fries said, is one area that he intends to work on as a recently-hired research scientist at the Florida Institute for Human and Machine Cognition (IHMC). The Tampa-based scientist, who has been on faculty at the University of South Florida for two decades, will work at both the Ocala and Pensacola IHMC locations until next summer, when he re-locates to Pensacola.

Fries’ main area of specialization is undersea technology. He holds 35 patents in the field, and is best known for inventing underwater sensors and robots that can determine the extent of oil spill contamination, detect submarines (or other robots), and help take fish counts.

The potential benefits of using such devices are economic, political and ecological.

To take just one example, accurate fish counts via robots (as opposed to using humans on boats, which cause the fish to scatter) can help a state like Florida, with 1,200 miles of coastline, manage recreational fishing.

“Knowing accurately how much is there is important for knowing how long to keep a season open,” and whether or not fish stock enhancements like fingerlings should be put out, Fries said.

“The open question is does that really help a population, or are there more effective strategies to use?” Fries added.

Functional implications aside, these underwater technologies provide us with “an underwater learning cloud,” Fries said. “The ocean begins to tell you its secrets.”

Fries said he looks forward to collaborating with other IHMC scientists focused on the underwater world, such as Dawn Kernagis, who works on risk mitigation for divers and understanding the genetic and physiological factors that can make divers prone to the bends.

“I could see projects emerging between Dawn and I,” Fries said. “I look at myself as a “technology” toolmaker. It’s hard to do good science without these tools, and science questions help drive tool development. There’s a dance between the two.”

IHMC CEO/Director Ken Ford said Fries will be a great addition to the team. “David Fries is a true innovator in undersea technologies. We are thrilled to have him,” Ford said.

He feels IHMC is open to accommodating his creative endeavors as they relate to his pursuit of science. “I tend to be a little out of the box,” Fries said.

Fries has collaborated with a Dutch artist in an exhibit on biomorphic patterns at the Dali Museum in St. Petersburg, and the Schmidt Ocean Institute is supporting his work on using data from the ocean to influence visualizations in live public performances.

“I’d like to continue to look at oceans and technology for art exploration,” Fries said. “The science can inform the art, and the art can inform science.”

Fries also has a practical, entrepreneurial side and enjoys engaging in research that fosters economic development. He has spearheaded several spin-offs from his research already.

“I hope to guide/shepherd some innovations towards economic development out of IHMC in the community,” Fries said. “I really get a thrill of taking an idea and turning it into something and then someone ultimately having a job related to it.”

Fries is originally from Pittsburgh—an “urban street urchin,” he calls himself. But he was smitten by the natural world as soon as he started exploring it.

“When I got into woods and saw another world besides concrete jungle, it excited me,” Fries said. “I ended up being in the blue space instead of the green space, and it’s been a wonderful ride.”

Fries said his work is so engaging, that he doesn’t really have time for hobbies, apart from longboarding to and from work, typically a 5-mile commute roundtrip.