The IHMC’s robotics team recently was lauded at one of the premier conferences in their field. 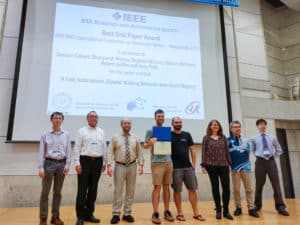 The conference is sponsored by the Institute of Electrical and Electronics Engineers’ (IEEE) Robotics and Automation Society. The paper is titled “A Fast, Autonomous, Bipedal Walking Behavior Over Rapid Regions.” It is linked here.

Walking over flat terrain is something humanoids are adept at across the industry. The behavior control system IHMC’s team developed dramatically improves the robot’s ability to smoothly traverse rough terrain (broken concrete and cinder blocks).

“Humanoid robots have a very difficult time traversing anything other than perfectly flat ground. They also have a hard time doing anything by themselves,” said Duncan Calvert, IHMC Research Associate. “We’re addressing both of those issues in this latest work, which is built on a simple idea: look at the ground, take a step, and repeat. It turns out to be not so simple to implement, which is why researchers have been working on this problem for decades.” 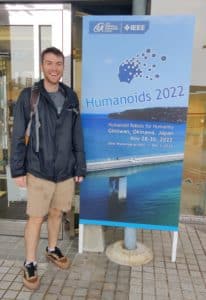 Duncan Calvert at the International Conference on Humanoid Robots 2022.

Calvert said the team made several improvements to the current state of the art and demonstrated it on Nadia, IHMC’s newest humanoid robot. The improvements allow Nadia to walk alone without pauses over a pile of cinder blocks.

“We are incredibly happy with our result and are honored by its positive reception,” Calvert said.

Of note: The last three times the IHMC robotics team has submitted a paper to the conference — 2016, 2019, and now 2022 — they have received the Best Paper award.

“It’s a huge honor to be recognized with this award,” said Research Scientist Dr. Robert Griffin, who leads the IHMC robotics team. “It’s an enormous amount of work from many people to generate this type of result that includes the entire robot pipeline, from hardware to perception to locomotion, so to have our contributions acknowledged by our colleagues in such a way, many of whom are doing incredible works themselves, is fantastic.”

Calvert said there will be several improvements for the reliability and performance of this algorithm that they will be tackling over the next few years.

“It’s a really exciting time for our lab,” Calvert said.