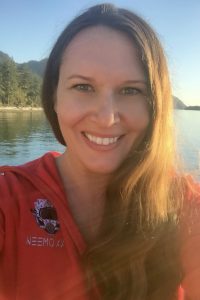 IHMC Research Scientist Dawn Kernagis is the 2018 recipient of the Young Scientist/Medical Doctor Award that is presented annually by the Undersea and Hyperbaric Medical Society.

The award, which was presented at the society’s annual banquet in Orlando, recognizes the work of a young scientist whose performance is consistently outstanding.

“I am beyond grateful for this award,” said Kernagis. “I have been blessed to be surrounded by inspirational colleagues and advisers while transitioning from being a full-time diver to a full-time researcher. This is such an unexpected surprise.”

Kernagis, who was inducted into the Women Divers Hall of Fame in 2016, spent her early career as a diver and leader of underwater explorations and conservation projects around the world. She spent more than a decade with a team of divers exploring Wakulla Springs and its deep-water caves. She also was selected in 2016 to become one of six crew members for NASA’s undersea mission, NEEMO 21.

Kernagis came to IHMC after completing her doctorate at Duke University. She and colleagues at the institute are focused on identifying ways to optimize performance and resilience for humans working in extreme environments.

She is currently leading an Office of Naval Research study to investigate potential human fuels for cold-water performance. She also is leading a NASA Translational Institute-funded study on how the brain lymphatic system responds to simulated microgravity.

“Dawn certainly deserves this award,” said Ford. “She is indeed an outstanding scientist and her colleagues here at IHMC are quite happy for her. This is another example of the high caliber of talent we are so fortunate to have at the institute.”

The Undersea and Hyperbaric Medical Society is an organization based in the U.S. which supports research on matters of hyperbaric medicine and physiology.