In a weekend international showdown, the Florida Institute for Human & Machine Cognition (IHMC) robotics team once again demonstrated its brawn as it placed a strong second in the powered exoskeleton division of the first annual Cybathlon. Held October 8th, in Zurich, Switzerland, the Cybathlon is a global competition for disabled athletes aided by wearable robotic devices.  The unique competition hosted 66 teams from across the globe, competing in six distinct divisions.

Using the Mina v2 exoskeleton, developed at IHMC’s research facility in Pensacola, Florida, the IHMC pilot athlete was Mark Daniel. Daniel, who grew up in Pensacola, suffered a spinal cord injury in 2007 as a result of a car accident, which left him paralyzed. He began assisting the IHMC research team in 2010, with the evaluation and testing of powered exoskeletons.

Senior Research Scientist Peter Neuhaus, the lead researcher on the project, said, “I am very proud of our team’s Silver Medal finish in the Powered Exoskeleton race. This competition was open to researchers and companies throughout the world, and to finish just behind an established company affirms our position in the field.”

German-based company ReWalk won first place in the competition, represented by Andre Van Ruschen, who also suffered a spinal cord injury due to a car accident. Nine teams from around the world competed in the exoskeleton division event, with IHMC being the only team from the United States to compete and place.

“The team worked hard getting the software and hardware ready, and Mark’s ceaseless training paid off,” Neuhaus continued. A true athlete in mind, spirit, and body, Daniel rolled his wheelchair up to fifteen miles a day and swam to prepare for the event.

The powered exoskeleton competition was comprised of a race among the athletes that included six tasks with a ten-minute time limit. The robotic-assisted tasks included sitting down and standing back up from a sofa; walking through a slalom course without hitting the poles; climbing a ramp and opening a door; walking up and down stairs; and walking on a path landing the feet on random flat stones.

There were five other disciplines beyond the exoskeleton division at the packed event, which welcomed over 4,600 visitors and 66 teams. It was held at the SWISS Arena Kloten and organized by the Swiss Federal Institute of Technology. The main sponsor for the competition was Hocoma, the maker of Lokomat and other rehabilitation exoskeletons.

Neuhaus said the Cybathlon marks an important step in IHMC’s long-term research goals in exoskeletons. The Cybathlon win is the most recent in a string of many for the IHMC robotics team. In June 2015, the team took second place in the world, and first place among teams from the United States, in the DARPA Robotics Challenge. “While it is impressive what we, as a community, have accomplished and demonstrated so far, we have a long way to go with regard to restoring mobility with robotic devices for people with paralysis,” Neuhaus said. “Our goal is to continue to make advancements in mobility assistance through cutting edge research.” 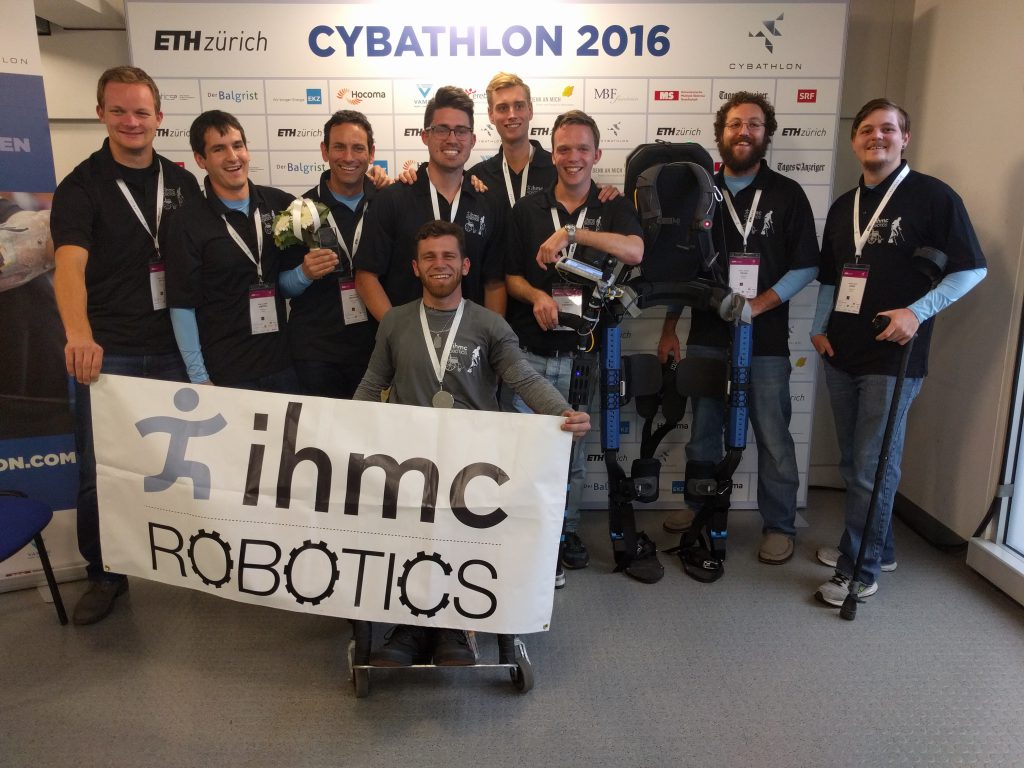