The Florida Institute for Human and Machine Cognition, (IHMC), officially opened its new, state of the art research facility named after Fredric Levin, a prominent, successful Pensacola businessman and lawyer.  On Monday, Sept. 26th, IHMC hosted a building dedication, ribbon cutting, and unveiled the name of the building followed by an open house and tours of the new facility. 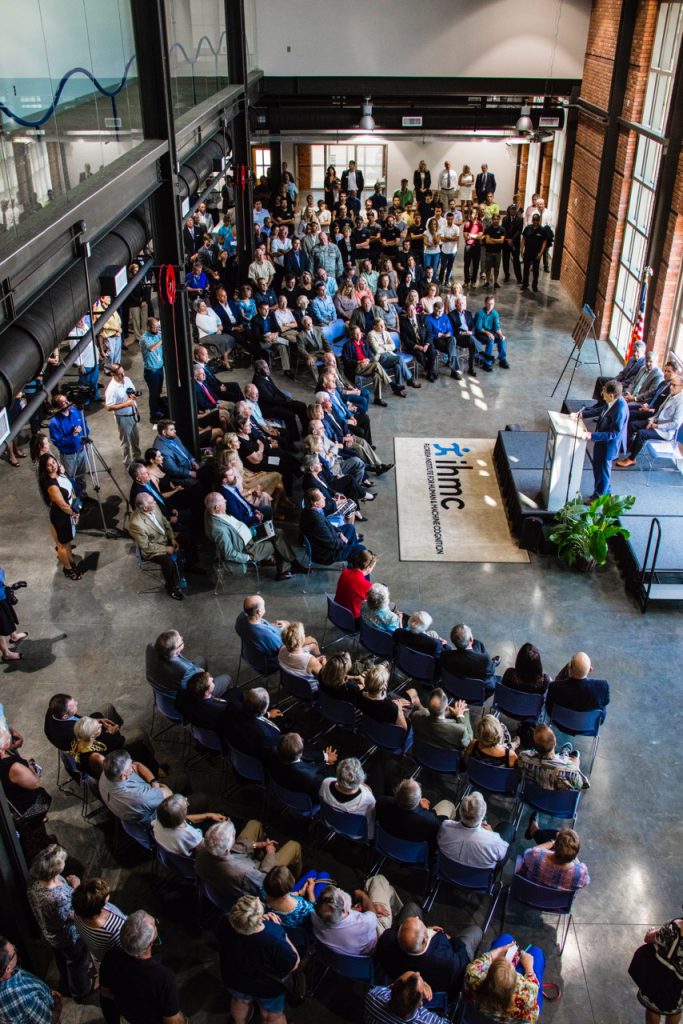 The event, attended by several hundred people, was hosted by IHMC Director, Dr. Ken Ford and the IHMC Board of Directors and emceed by IHMC’s Dr. Pamella Dana. Also speaking at the event was the IHMC Board Chair Bill Dalton, Escambia Board of County Commissioners Chair Grover Robinson, Pensacola Mayor Ashton Hayward, and IHMC CEO Ken Ford.  The donor, Fredric Levin, who made a one million dollar cash gift to IHMC, was the keynote speaker at the event.

“The opportunities facilities like the IHMC offer Pensacola are amazing,” said Levin. “IHMC is bringing brilliant researchers to our area where people can learn and benefit from them in a wide range of areas, like robotics, medicine, and technology. My $1 million dollar donation is for not only the future of our community, but for the benefit of all mankind.”

“It’s an exciting moment in IHMC history,” said IHMC Director Dr. Ken Ford, noting this is the institute’s first new building since it was founded in 2004. The building, with a physical address of 420 East Romana Street, is adjacent to IHMC’s current main building at 40 S. Alcaniz St., which IHMC will continue to use. The $8 million dollar building was constructed by Hewes & Company, LLC and designed by Pensacola’s Quina Grundhoefer Architects. IHMC will use the 30,000 square foot facility to consolidate other research locations, including the Wright Street Robotics Lab.

Under Dr. Ford’s leadership, IHMC has grown into one of the nation’s premier research organizations with world-class scientists and engineers investigating a broad range of topics related to building technological systems aimed at amplifying and extending human cognitive, physical and perceptual capacities. Its headquarters are in Pensacola, Fla., with an associated research facility in Ocala, Fla.

The first floor of the Levin Center for IHMC Research houses both a robotics and exoskeleton high bay laboratory and a sensory substitution lab. The second floor observation corridor showcases a glass wall that overlooks the high bay robotics laboratory that will offer youth and area visitors viewing access to state of the art robotics work.  The second and third floors also include conference rooms, offices, a boardroom, and future lab space. There is a rooftop deck offering excellent views of Downtown Pensacola in all directions.

Over the years Fred Levin has given more than $20 million to local charitable and community based organizations. He and his sister-in-law Teri, gave $1 million to the YMCA of Northwest Florida for a new facility, he gave $500,000 to build the Marilyn Kapner Levin Center for Children’s Advocacy and Child Abuse Prevention which houses the Gulf Coast Kid’s House, $100,000 to the new UWF Argo Football program, and to date, another $2.5 million to other organizations like Loaves and Fishes Soup Kitchen, Habitat for Humanity, Sacred Heart Children’s Hospital, and Escambia Westgate Center.  He is best known for rewriting Florida’s Medicaid Third-Party Recovery Act to allow the State of Florida to sue and recover billions of dollars from the tobacco industry for smoking related illnesses. The Fredric G. Levin College of Law at the University of Florida was named for him after Mr. Levin donated $10 million to the school in 1999.

Among his many accomplishments, Mr. Levin was named The Trial Lawyer of the Year by the National Trial Lawyers for 2015. He was also inducted into the Trial Lawyers Hall of Fame in 2009, which is located at Temple Law School in Philadelphia.  Fred Levin is also a member of the Inner Circle of Advocates, an organization limited to 100 of the top trial attorneys in the country, and has been listed in every edition of the publication Best Lawyers in America. A biography of his life was published in 2014, titled, ‘And Give up ShowBiz? How Fred Levin Beat Big Tobacco, Avoided Two Murder Prosecutions, Became a Chief of Ghana, Earned Boxing Manager of the Year & Transformed American Law.’