The robotics team from the Florida Institute for Human and Machine Cognition (IHMC) leaves this weekend for what promises to be a historic milestone in the science of making machines move and think like humans.

The DARPA Robotics Challenge Finals, to be held June 5-6 in Pomona, Calif., is sponsored by the Defense Advanced Research Projects Agency. It will test 25 teams from around the world in a challenge course designed to emulate a disaster area where humans could not safely go. IHMC’s team will be using the 6-foot-tall Atlas robot, built by Boston Dynamics but with the all-important controlling software designed by IHMC researchers.

The winning team will bring home $2 million from DARPA, which will go to further robotics research. The second-place team will win $1 million.

“It’s been a lot of non-stop work, but we’re ready to go,” said Doug Stephen, one of the computer scientists on the project for IHMC.

For years, movies and television shows have portrayed bipedal robots as virtually flawless, fast-moving, self-thinking units. But the reality has lagged far behind that characterization. The DARPA Robotics Challenge was designed to push the science and engineering to the next level. And in recent weeks, IHMC’s Atlas, nicknamed “Running Man,” has stepped up to the occasion, performing well on the tasks it will face in the finals, including driving a car, walking over a debris field, opening doors, cutting a hole in a wall, turning a valve for a fire hose and climbing stairs.

The finals require the robots to think for themselves to a large degree and perform the eight tasks in 60 minutes or less — on battery power, without a safety line, and with limited communications with their handlers. This week, IHMC’s machine finished the practice course well within the time frame.

“I am unconditionally proud of our robotics team and hope that the robot fates smile upon them in Pomona,” said IHMC CEO/Director Ken Ford. “They are a terrific group of young engineers and computer scientists.”

In the first two rounds of the Robotics Challenge in 2013, IHMC placed first in the virtual (computer simulation) trials, and second in the field trials, thanks in large part to the advanced computer software IHMC developed, organizers said. Other teams in next week’s finals come from some of the most advanced robotics programs in the country, including Massachusetts Institute of Technology, Lockheed Martin, and Carnegie Mellon University, as well as several teams from Japan, South Korea, China and Germany.

IHMC robotics staff members are planning to spend most of Thursday and Friday packing Atlas, the Polaris four-wheeled vehicle it will drive, and almost a ton of support and computer equipment for shipment by FedEx to California. The truck and most team members leave Saturday morning.

A video of Wednesday’s final practice run at the IHMC Robotics Lab in Pensacola can be seen here:https://www.youtube.com/watch?v=iCPiNOwh2is. Photos of the Atlas robot and the research team are attached to this email. IHMC also hopes to provide a news release Saturday night, June 6, after the results of the finals are announced.

For more information, contact Will Rabb, IHMC communications coordinator, at 850-512-4327 or email atwrabb@ihmc.us. DARPA updates on the competition can be found at http://www.theroboticschallenge.org. 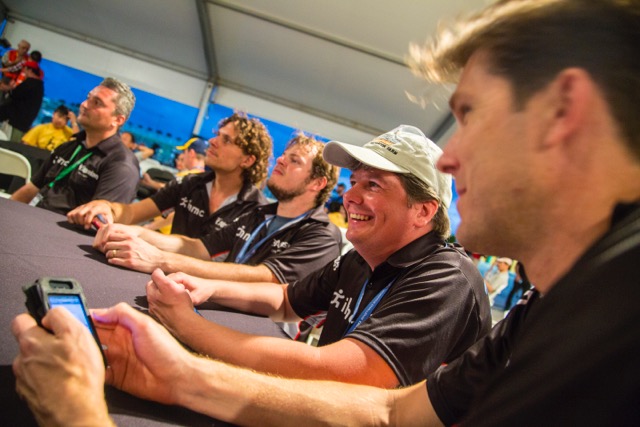