IHMC Moves Ahead with Pensacola Expansion 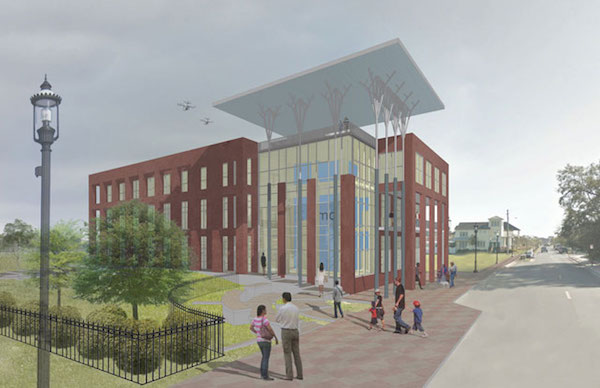 The Florida Institute for Human and Machine Cognition is back on track with a planned expansion of its Pensacola research facility following a nearly year-long delay caused by flooding of downtown in April 2014.

Completion is scheduled for February 2016. The contractor is Hewes and Company LLC, a Pensacola firm. Hewes has done extensive work across the Pensacola area, including large buildings for Pensacola Christian College, Avalex Technologies and AppRiver.

“We’re really pleased to be back on track with the new building,” said IHMC Director and CEO Ken Ford. “The delay was troublesome, but the architects were able to develop some really good, workable solutions. We’re eager now to get this building built and keep growing in Pensacola.”

In response to the flooding, the first floor of the new building was redesigned to raise it by one foot, to an elevation of 13 feet above sea level, and all structural materials were reviewed to ensure that they are water-resistant. Meanwhile, flood damage to the existing building has been repaired, but a planned expansion of that facility remains on hold.

The three-story, 30,000-square-foot building will substantially increase IHMC’s Pensacola footprint, allowing consolidation of research and administrative functions at the main campus at 40 S. Alcaniz Street in the Seville Historic District, and allow for future growth. IHMC’s operations are currently spread over four separate sites in downtown.

The $8 million expansion is being funded with a loan secured through Escambia County. IHMC is solely responsible for repayment of the loan.

The new building will face Romana Street and be located behind the current facility on land IHMC owns between Alcaniz and Florida Blanca streets. The building’s facade will be reminiscent of the old brick warehouses that used to dominate the area while serving the Port of Pensacola.

Lead architect Carter Quina, AIA, of Quina Grundhoefer Architects in Pensacola, said the appearance of the redesigned building remains virtually the same as before, while providing more security against potential future flooding. It retains its “fit” with the nearby historic neighborhoods.

“We worked hard to give it a look that fits in with the Historic District, and that remains,” Quina said. “The interior is high-tech, but the exterior reflects its location in what the city designated as the Brick Warehouse District, and the use of brick, steel and concrete, all historical materials used in the area, gives it that feel. We’re also adding glass to allow natural daylight inside and to make the interior accessible to the public.”

He said the new building features design and technology that “maintain all of our sustainability goals,” including the extensive use of natural daylight, LED lighting that adjusts to the daylight, extensive soundproofing for the labs, durable materials, and a powerful lab hoist designed with input from the scientists who will be using it.

The building was also designed to foster the use of stairs instead of elevators, cutting energy use and helping employees stay fit.

The first floor of the new building will largely consist of research labs, including an expanded Robotics Lab and a multi-sensory interfaces lab focused on sensory displays and human-machine interfaces, and a street-front lobby/exhibit space demonstrating the work at IHMC.

The second floor will feature a glass-walled observation area for public tour groups and others to observe the Robotics Lab safely and without interfering with the work. The lab is a popular tour destination for schools and other visitors. 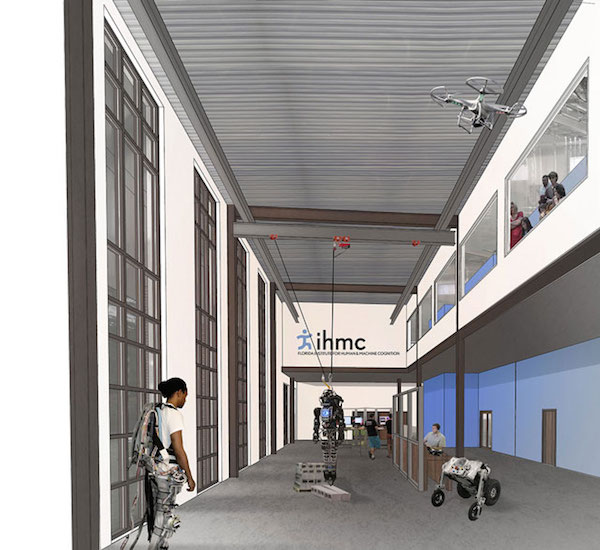