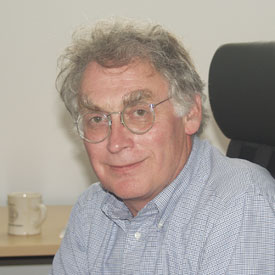 Paul J. Feltovich is a retired Senior Research Scientist at IHMC. Prior to IHMC, he was Professor In Medical Education and Psychiatry (honorary) at Southern Illinois University School of Medicine.

Dr. Feltovich received a bachelor’s degree in mathematics from Allegheny College (PA) and a Ph.D. in educational psychology from the University of Minnesota in 1981.  He was a post-doctoral fellow in cognitive psychology at the Learning, Research, and Development Center, University of Pittsburgh, from 1978 to 1982.

He has conducted research and published on topics such as expert-novice differences in complex cognitive skills; conceptual understanding and misunderstanding for complex knowledge; and novel means of instruction in complex and ill-structured knowledge domains (including contributing to the creation of Cognitive Flexibility Theory and Reductive Bias Theory with Rand Spiro and Richard Coulson).  Since joining FIHMC, he has been investigating (with Jeff Bradshaw and the KAoS group) coordination, regulation, and teamwork in mixed groups of humans and intelligent software agents (Human-Agent-Robotic Teamwork—HART).  In part, these studies employ a “cultural” approach to controlling and modeling software agent activity, based on the utilization of diverse policy systems, ranging from formal pertinent law, to group traditions, to standards of practice, to norms for acceptable every day behavior (e.g., various codes of etiquette).  The work also addresses factors that contribute to making software agents acceptable to humans as partners in complex and consequential work.

He has authored more than 150 professional articles and four books.  In particular, he is co-author (with Micki Chi and Robert Glaser) of a designated Science Citation Classic paper on problem solving in physics which has been fundamental to the development of human expertise as a field of study in cognitive science.  Feltovich was chosen to write one of the articles on expertise for the Third International Encyclopedia for the Social and Behavioral Sciences.  He is also co-editor (with Ken Ford and Robert Hoffman) of Expertise in Context:  Human and Machine, and (with Ken Forbus) Smart Machines in Education.  He is co-editor  (with Anders Ericsson,  Neil Charness, and Robert Hofmann) of the first Cambridge Handbook on Expertise and Expert Performance (Cambridge University Press).  He is also co-editor (with Robert Hoffman et al.) of Accelerated Expertise:  Training for  High Proficiency in a Complex World (Psychology Press).  He has served as editor of Teaching and Learning in Medicine and has served on several editorial boards, including the Educational Researcher, the Journal of the Learning Sciences, and Advances in Health Sciences Education.