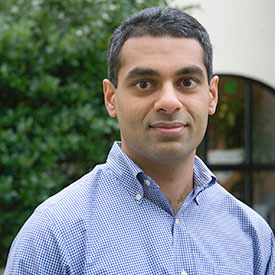 Niranjan Suri, senior research scientist, is Associate Director at IHMC. He also is the Associate for Research for the Information Sciences Division at the U.S. Army Research Laboratory. He received his Ph.D. in computer science from Lancaster University, England, and his bachelor’s and master’s degrees in Computer Science from the University of West Florida.

Niranjan’s current research activity is focused on the notion of Agile Computing, which supports the opportunistic discovery and exploitation of resources in highly dynamic networked environments.

He also works on Process Integrated Mechanisms, a novel approach to coordinating the behavior of multiple robotic, satellite, and human platforms.

Niranjan’s other research interests include distributed systems, networking, communications protocols, virtual machines, energy-aware computing, and software agents. In the past, he has worked on several other projects at IHMC, including CmapTools, Tactile Interfaces, and Oz.

He co-organized the Agents, Interactions, Mobility, and Systems (AIMS) track at the ACM Symposium on Applied Computing from 2002 to 2006. He has taught undergraduate and graduate courses in computer science at UWF for 10 years. He has been a principal investigator of numerous research projects sponsored by the US Army Research Laboratory (ARL), the US Air Force Research Laboratory (AFRL), the Defense Advanced Research Projects Agency (DARPA), the Office of Naval Research (ONR), and the National Science Foundation (NSF). He has authored or co-authored over 150 papers, has been on the technical program committees of several international conferences, and has been a reviewer for NSF as well as several international journals.