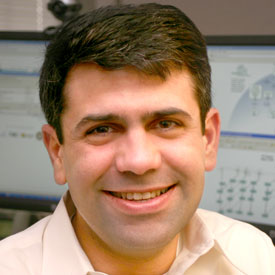 At IHMC, Dr. Carvalho has participated and led several research projects sponsored by the U.S. Army Research Laboratory, the U.S. Air Force Research Laboratory, the National Science Foundation and others. His research interests are primarily in the areas of tactical and cognitive networks, applied machine learning and network security. Other research activities also include projects in the areas of intelligent data analysis and applied causal analysis for complex systems.

Dr. Carvalho is also an associate professor at the Florida Institute of Technology (Melbourne FL), where he is also the Director of the Harris Institute for Assured Information. He is a permanent member of the editorial board of the Scientia Magazine (ISBN 0104-1770), and has also acted as a Program Committee Member for several conferences and journals such as the Special Track on Agents, Interactions, Mobility and Systems (AIMS) at the ACM Symposium on Applied Computing (SAC), the International Journal for Network Security, the International Joint Conference on Artificial Intelligence, the Autonomous Agents and Multiagent Systems, the First International Conference in Concept Mapping and the Jornadas de Investigacion Y Desarrollo en Informatica – JIDI. He has also contributed to other IHMC research efforts in Knowledge modeling ( CmapTools) and elicitation, machine learning and control systems.

Before joining IHMC Dr. Carvalho worked on the design, deployment and operation of large scale data networks, both as a security officer and as a network operations manager, leading a team of network engineers. Some of his responsibilities also included the design and deployment of security policies, procedures and technologies for corporations and financial institutions, as well as training for support and operations personnel.