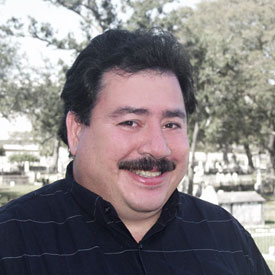 Mario has been linked to IHMC for several years as part of IBM’s team that participated in Project Quorum. He earned a B.Sc. in Computer Science from the Instituto Tecnológico de Costa Rica, and is finishing his M.Sc. in Computer Science at the same Institution. For many years he led IBM Latin America Education Research Center’s technical support for educational projects throughout Latin America. He designed and implemented the SAR/tf, a network administration and interface program that provided a friendly environment for teachers and students in K-12 schools which became an IBM product. Most recently, he coordinated GBM’s (IBM’s subsidiary in Central America and Dominican Republic) transition through the Y2K. Mario joins IHMC as a Research Associate and will be working on software development with the concept mapping team.