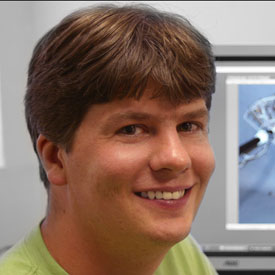 Jerry Pratt (Ph.D., M.Eng., and B.S. degrees from M.I.T. in Computer Science and B.S. degree from M.I.T. in Mechanical Engineering) leads a research group at IHMC that concentrates around the understanding and modeling of human gait and the applications of that understanding in the fields of robotics, human assistive devices, and man-machine interfaces. Current projects include Humanoid Avatar Robots for Co-Exploration of Hazardous Environments, FastRunner Robot, and Exoskeletons for Restoration of Gait in Paralyzed Individuals. Jerry was the team lead for Team IHMC in the DARPA Robotics Challenge (DRC) project. In 2015 IHMC won second place in the DRC finals. In 2013 Team IHMC achieved first place in the Virtual Robotics Challenge and second place in DARPA Robotics Challenge Trials. Before coming to IHMC, Jerry was the President of Yobotics, Inc., a small company that he cofounded in 2000. At Yobotics, Jerry helped develop the RoboKnee, a powered exoskeleton that allowed one to carry large loads while hiking over rough terrain with little effort. Prior to founding Yobotics, Jerry worked at the M.I.T. Leg Laboratory, where he designed, built, and controlled several bipedal robots. His approach of maximizing speed, agility, and biological similarity through the understanding of biological counterparts, is helping to remove the stereotype of robots as being clunky, jerky-moving machines. Jerry’s hobbies include sailing, playing board games, football, basketball, and paintball.