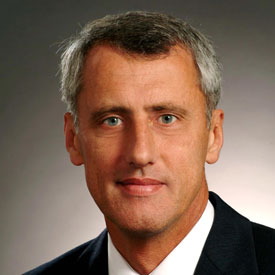 Dr. John Rogacki served as associate director at IHMC’s Ocala campus from 2010 to 2016. He brought to the Institute a wealth of experience in senior level administrative and research work with the U.S. Air Force, National Aeronautics and Space Administration, and the U.S Department of Defense.

He earned his Ph.D. and master’s degree in mechanical engineering from the University of Washington, and his bachelor’s degree in engineering mechanics from the U.S. Air Force Academy. Later, he became Associate Professor of Engineering Mechanics (and Chief of the Materials Division) at the USAF Academy. In 2005, he graduated from the Senior Executives Program in National and International Security at Harvard’s John F. Kennedy School of Government. An accomplished pilot, he logged more than 3,300 flying hours as pilot, instructor pilot, and flight examiner in aircraft ranging from motorized gliders to heavy bombers.