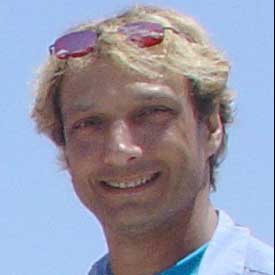 Godowski received his BSEE from the University of Florida, Gainesville, where he pioneered the Highway Speed Legged Locomotion Project at UF’s Machine Intelligence Lab. After graduation, Godowski was invited to continue his Highway Speed Locomotion Research at IHMC, working with Dr Jerry Pratt, developer of the Spring Flamingo. The continuation of this research led to a FastRunner proposal to DARPA, in which it is shown that a biped robot running at high speed in an efficient and controllable manner is now possible with resources on hand and the expertise now available at IHMC.

Working with Dr Anil Raj, Godowski adapted his novel concepts to the mission of Sensory Substitution for Wounded Warriors. This work led to the design of the IHMC Passive Dynamic Exoskeleton. Godowski is looking to further develop this technology into a robust robotic orthotic/prosthetic commercially available product for locomotion gait therapy for rehabilitation after stroke, traumatic brain injury, or spinal cord injury that can be used for daily walking mobility.

Godowski and a Team of Researchers at IHMC, with Dr Jerry Pratt as Principle Investigator, has been awarded initial DARPA funding for the FastRunner Project.

Initial Technical milestones of running at 20 mph in simulation and mechanical design capable of implementing this demonstration have been accomplished, with successful demonstration of stable running without any controller, achieving high speed stability by novel passive dynamic concepts adapted from avian architecture.

A presentation of the FastRunner accomplishments to date and prospects for future development can be found at the website for the 2011 Dynamic Walking Conference in Jena, Germany.

Godowski has performed an initial conceptual study for a more effective earthbound reduced gravity simulator for our future astronauts as part of the Moonwalkers project. Godowski’s novel concept would be the first strategy to suspend the arms and legs of the astronaut in reduced gravity as well as the main body, so their swing dynamics are suitably modified for effective gait training. Godowski has also initiated a study toward practical avian flight for robotic systems by adapting the efficient, novel dynamic concepts that are showing initial success with FastRunner.

Godowski is working toward efficient application of these novel dynamic concepts to enhance the effectiveness of strategic human and machine teams for future land, sea, air and space applications.