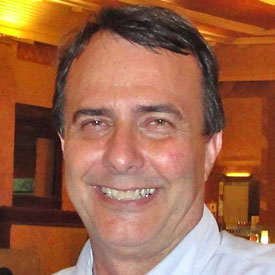 Jeffrey M. Bradshaw is a Senior Research Scientist at IHMC, where he leads the research group developing the KAoS policy and domain services framework for distributed systems management and the coordination of human-agent-robot teamwork. He earned a bachelor’s degree from the University of Utah, and a Ph.D. in cognitive science from the University of Washington.

He co-leads the development of the Luna Software Agent Framework and the Sol Cyber Framework. Bradshaw chairs the Scientific Advisory Council for the Nissan Research Center Silicon Valley (NRC-SV), which has the development of autonomous vehicles as its major focus. Selected Publications on these and other research projects are online. A biographical sketch is available on Wikipedia.

Jeff has been a Fulbright Senior Scholar at the European Institute for Cognitive Sciences and Engineering (EURISCO) in Toulouse, France; a visiting professor at the Institut Cognitique at the University of Bordeaux; is former chair of ACM SIGART (now SIGAI); and former chair of the RIACS Science Council for NASA Ames Research Center. He served as a member of the National Research Council (NRC) Committee on Emerging Cognitive Neuroscience Research in the Next Two Decades , was an advisor to the HCI and Visualization program at the German National AI Research Center (DFKI), and was a scientific advisor to the Japanese NEC Technology Paradigm Shifts initiative. He also served as a member of the Board on Global Science and Technology for the National Academies of Science and as an external advisory board member of the Cognitive Science and Technology Program at Sandia National Laboratories. He is an Honorary Visiting Researcher at the Center for Intelligent Systems and their Applications and AIAI at the University of Edinburgh, Scotland, a member of the Graduate Faculty at the Florida Institute of Technology, a faculty associate at the University of West Florida, and is a member of the Technical Committee for IEEE Systems, Man and Cybernetics. He served as a member of the 2015 Defense Science Board Summer Study on Autonomy. In 2011, he received the Web Intelligence Consortium Outstanding Contributions Award.

Formerly, Jeff led research groups at The Boeing Company. Though his earliest publications were focused on memory and language, Jeff’s research focus soon turned to a wide variety of topics relating human and machine intelligence. With Ken Ford, he edited the seminal volume Knowledge Acquisition as a Modeling Activity, and became well known for his role in helping develop a suite of successful methodologies and tools for automated knowledge acquisition and for the simplification of complex modeling tasks (Aquinas, Axotl,Canard, DDUCKS). He led the development of eQuality, an interactive visual framework with an underlying ontology-based model for streamlining strategic corporate business processes that was used as the principal enterprise modeling tool for the Boeing 777 airplane program.

Jeff has had a continuing interest in improving health care. For eight years he co-led a group at the Fred Hutchinson Cancer Research Center, and was co-PI for an Agency for Health Care Policy and Research (AHCPR) computerized decision-support systems (CDSS) grant to develop knowledge-based technology to provide better long-term post-transplant care of bone marrow transplant patients scattered throughout the world.

Learning technologies has been another area of interest. Jeff co-chaired The Fourth International Workshop on Human and Machine Cognition, “Education and Smart Machines.” As co-chair of the Emerging Technologies subcommittee of the Aviation Industry Computer-Based Training Committee (AICC) for several years, he coordinated cooperative research efforts by airlines, airframe manufacturers, and the computer industry to increase interoperability of advanced training and agent-based performance support tools. He is an expert advisor to an intelligent tutoring system development project that will provide advanced technical training programs at the U.S. Navy’s Center for Information Dominance in Pensacola, and at other Navy schools.

Human-Agent-Robot Teamwork has been a central interest for many years. From 2002-2006, KAoS was used as part of a NASA series of annual two-week field tests of human-robot teams performing simulated planetary surface exploration at the Mars Desert Research Station in the Utah desert. Jeff was sponsored by DHS to undertake detailed simulation studies of the use of human-robot teams to secure facilities at Port Everglades. He has also led the ONR-sponsored NAIMT and Coordinated Operations projects where a team of humans and heterogeneous robots performed field exercises at the Naval Air Station in Pensacola, aimed at port reconnaissance, and robot-assisted detection and apprehension of intruders. Jeff co-founded and organized the Human-Agent-Robot Teamwork Workshop series (HART 2010, 2012, 2015, 2016). He served as lead editor for a special issue of IEEE Intelligent Systems on HART. In June 2012, he led an international workshop for the National Academies of Science on Intelligent Human-Machine Collaboration. Several of Jeff’s co-authored papers relating to the inadequacies of the supervisory control model were cited in a July 2012 Defense Science Board Task Force Report on the Role of Autonomy in DOD, which recommended that “DoD abandon the use of ‘levels of autonomy.’” Jeff served as a member of the 2015 Defense Science Board Summer Study on Autonomy.

Jeff has served on the editorial boards of the Web Semantics Journal, the Journal of Autonomous Agents and Multi-Agent Systems, the Knowledge Acquisition Journal the International Journal of Human-Computer Studies, Schedae Informaticae, and the Web Intelligence Journal. With Robert Hoffman and Ken Ford, he served as co-editor of the Human-Centered Computing Department for IEEE Intelligent Systems and, with Robert Hoffman, Pat Hayes, and Ken Ford, is a co-editor of Collected Essays on Human-Centered Computing, 2001-2011.

In partnership with the Autodesk Research Digital Environment program, Jeff led IHMC participation in the Advanced Technologies for Life-Cycle Management of Sustainable Building Performance initiative and is a member of the Parametric Human Consortium. He has participated in NASA Blue Sky Study Groups for the “Human-Centered Vision of Mars Exploration” and for the “Small Pressurized Rover,” (later called the “Lunar Electric Rover”), as well as the AFRL Blue Sky study on “Improving Understanding of Complex Information.”

KAoS is a policy and domain services framework based on W3C’s OWL ontology standard (see ontology.ihmc.us). KAoS was the first to offer an ontology-based approach and is currently the most successful of such efforts. IHMC is collaborating with the NSA-sponsored Federal Digital Policy Management (DPM) Initiative, which has selected the KAoS core ontology as the basis for its future standards efforts (see white paper). KAoS has been used in a variety of government-sponsored and commercial projects for network management, secure policy-based governance of complex systems, and for the coordination of human-agent-robot teams.

The Luna Software Agent Framework leverages IHMC’s extensive experience in the design of agent systems. Luna agents function both as interactive assistants to people and as continuously-running background aids to data processing and knowledge discovery. Luna agents achieve much of their power through built-in teamwork capabilities that, in conjunction with the KAoS policy services framework, allow them to be proactive, collaborative, observable, and directable. In order to support dynamic scalability and other features of the Sol framework, the Luna platform supports the policy-governed option of allowing the state of agents (vs. code of agents) to migrate between operating environments and hosts.

The Sol Cyber Framework was designed and developed under US Department of Defense sponsorship to address the demanding requirements of distributed network operations centers. Specifically, Luna software agents, KAoS security and teamwork policies, and visualizations based on an understanding of human perception and cognition are used to enable distributed sensemaking, rapid detection of threats, effective protection of critical resources, and resilient mission assurance. Coactive emergence of threat understanding through human-agent collaboration is used as a sensemaking strategy for taskwork and teamwork. Sol also implement capabilities for organic resilience and semantically-rich policy governance as a means of assuring effective and adaptive human-agent team response. Among other applications, Sol has been used to support exercises at MIT/Lincoln Labs, and is being adapted to the needs of the Capstone training program at the Center for Information Dominance and to a “red-team-in-a-box” project for the Office of Naval Research. Jeff collaborates with Sandia National Laboratories on the “Human Dimensions of Cyber Operations” initiative. He was an invited speaker at the Second Experimental Security Panoramas for Critical System Protection Workshop (ESP 2012) and at the Eighth Cyber Security and Information Intelligence Research Workshop (CSIIRW 2012) at Oak Ridge National Labs.

Jeff and his wife Kathleen are the parents of four children and fifteen grandchildren. He has served twice as a bishop in the Church of Jesus Christ of Latter-day Saints, and twice as a counselor in the Pensacola Stake Presidency (see Mormon Scholars Testify profile). Among other publications on temples and the ancient Near East, Jeff has written two volumes to date for a highly-acclaimed scholarly commentary series on the book of Genesis entitled In God’s Image and Likeness (http://templethemes.net). He is a vice president for The Interpreter Foundation, was a member of the Advisory Board for the Academy for Temple Studies, and is a senior research analyst for the B.H. Roberts Foundation. Jeff is the co-founder of Interpreter Science and Mormonism Symposium series, including the 2013 meeting entitled Cosmos, Earth, and Man and the 2016 meeting entitled Body, Brain, Mind, and Spirit. From July 2016-September 2019, Jeff and Kathleen served missions in the Democratic Republic of Congo Kinshasa Mission office and the DR Congo Kinshasa Temple. They currently live in Nampa, Idaho.