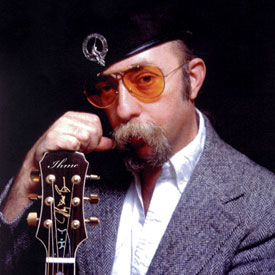 Jeffrey Baxter has had a long and successful career in the music and entertainment field as a founding member of Steely Dan, a member of the Doobie Brothers and as a record producer for such artists as Carl Wilson of the Beach Boys and The Stray Cats. He has been a studio musician for 35 years, recording with such artists as Donna Summer, Dolly Parton, Ringo Starr and Rod Stewart and has composed music for movies and television including the original theme for “Beverly Hill 90210,” music for “King of the Hill” and scoring for movies like “Bull Durham” and “Roxanne.”

Although still actively involved as a guitarist, composer, producer and engineer, Mr. Baxter currently serves as an advisor to Rep. Dana Rohrabacher, (Chairman, Sub-Committee on Oversight and Investigations and Senior Member, House Foreign Relations Committee). He is a Specialist Reserve Officer for the Anti-Terrorist/Major Crimes Division of the Los Angeles Police Department and member Terrorist Early Warning Group, (TEW), Los Angeles County Sheriff’s Dept. He is a consultant/contractor for NGA/InnoVision, (National Geo-Spatial Intelligence Agency), as well as holding current consulting agreements with SAIC, Northrop-Grumman, Ball Aerospace, Defense Group Inc, Sierra Nevada Corp and General Dynamics Information Technologies. He is an advisor to both the Principle Deputy and the Director of Mission Support for the NRO, (National Reconnaissance Office), a consultant to the OSD/Special Capabilities Office and to the AFRL, (Air Force Research Laboratory) at WPAFB, the OUSD/I, (Office of the Undersecretary for Intelligence) for OSD and The DNI, (Director of National Intelligence.) He is a Senior Fellow and member of the Board of Regents at the Potomac Institute for Policy Studies, a Senior Thinker at the IHMC, (Institute for Human & Machine Cognition) and a member of the Director’s Strategic Red Team at MIT/Lincoln Laboratory. He has served as a consultant to Mr. Charlie Allen, Under Secretary for Intelligence & Analysis at DHS, (Dept of Homeland Security) on both his Advisory Board and his Collection Strategy Board. He has also served as a consultant to NASIC, (National Air & Space Intelligence Center) and NASA’s ESAC, (Exploratory Systems Advisory Committee.) Mr. Baxter has also made presentations on the subjects of VR, cyberspace, CI and CT to In-Q-Tel, the ODNI, (Office of the Director of National Intelligence), the past 4 GEOINT Conferences, the Harvard Kennedy School of Government and the FBI. Mr. Baxter has also served as a consultant to the CIO of NCTC, National Counter Terrorism Center), the Laser Advisory Board at the Lawrence Livermore National Laboratory, General Atomics, Boeing and Lockheed Martin as well as for 4 consecutive Directors for MDA, GEN Mallory O’Neil, GEN Lester Lyles, GEN Ronald Kadish and GEN Henry “Trey” Obering.) Other affiliations upon request from persons with appropriate clearances.