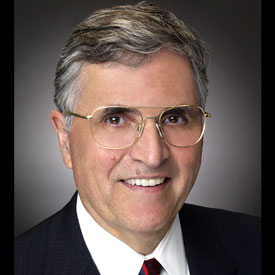 Harrison Hagan Schmitt, a native of Silver City, NM, has the diverse experience of a geologist, pilot, astronaut, administrator, businessman, writer, and U. S. Senator. He married to Teresa A. Fitzgibbon of Los Alamos, NM in 1985. Schmitt received his B. S. from Caltech, studied as a Fulbright Scholar at Oslo, and attended graduate school at Harvard. Geological field studies in Norway formed the basis of his Ph.D. in 1964. As a civilian, Schmitt received Air Force jet pilot wings in 1965 and Navy helicopter wings in 1967, logging more than 2100 hours of flying time.

Selected for the Scientist-Astronaut program in 1965, Schmitt organized the lunar science training for the Apollo Astronauts, represented the crews during the development of hardware and procedures for lunar surface exploration, and oversaw the final preparation of the Apollo 11 Lunar Module Descent Stage. He served as Mission Scientist in support of the Apollo 11 mission. After training as back-up Lunar Module Pilot for Apollo 15, Schmitt flew in space as Lunar Module Pilot for Apollo 17 – the last Apollo mission to the moon. On December 11, 1972, he landed in the Valley of Taurus-Littrow as the only scientist and the last of 12 men to step on the Moon.

In 1975, after two years managing NASA’s Energy Program Office, Schmitt fulfilled a long-standing personal commitment by entering politics. Elected in 1976, he served a six-year term in the U.S. Senate beginning in 1977. Senator Schmitt, the only “natural scientist” in the Senate since Thomas Jefferson was Vice-President of the United States and President of the Senate, worked as a member of the Senate Commerce, Banking, Appropriations, Intelligence, and Ethics Committees. In his last two years in the Senate, Schmitt held the position of Chairman of the Commerce Subcommittee on Science, Technology, and Space and of the Appropriations Subcommittee on Labor, Health and Human Services, and Education. He later served on the President’s Foreign Intelligence Advisory Board, the President’s Commission on Ethics Law Reform, the Army Science Board, as Co-Chairman of the International Observer Group for the 1992 Romanian elections, and as Vice Chairman of the U.S. delegation to the 1992 World Administrative Radio Conference in Spain. He is on the Maguire Energy Institute’s Board of Advisors, and served as co-chair of NASA’s Human Planetary Landing Systems Capabilities Road-mapping effort in 2004-05.

Harrison Schmitt became Chairman of the NASA Advisory Council in November 2005, leading its deliberations on issues related to Aeronautics, Audit and Finance, Biomedicine, Exploration (human flight systems development), Human Capital, Science, and Space Operations. He also consults, speaks, and writes on policy issues of the future, the science of the Moon and Planets, history of space flight and geology, space exploration, space law, and the American Southwest. He presently is Chair Emeritus of The Annapolis Center (risk assessment) and is Adjunct Professor of Engineering, University of Wisconsin-Madison, teaching “Resources from Space.” Schmitt became a consultant to the Fusion Technology Institute at the University of Wisconsin in 1986, advising on the economic geology of lunar resources and the engineering, operational, and financial aspects of returning to the Moon. He is on the staff of the Institute for Human and Machine Cognition of Pensacola, Florida. Current board memberships include Orbital Sciences Corporation, Edenspace Systems Corporation, and PhDx Systems, Inc., and, as a retired Director, he continues as an emeritus Member of the Corporation of the Draper Laboratory. He also has served as a member of the Energy Department’s Laboratory Operations Board. In 1997, Schmitt co-founded and became Chairman of Interlune-Intermars Initiative, Inc., advancing the private sector’s acquisition of lunar resources and Helium-3 fusion power and clinical use of medical isotopes produced by fusion-related processes. He is the author of, “Return to the Moon” (2006 Springer-Praxis) that describes a private enterprise approach to providing lunar helium-3 fusion energy resources for use on Earth.