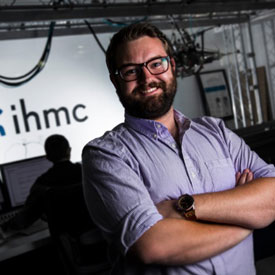 Doug is an alumnus of the University of West Florida in Pensacola, where he studied Computer Science, Physics, and Mathematics. He began working in the Robot Lab as an Intern in 2011 as a member of the Mina/X1 Exoskeleton team before coming on as a full-time researcher and software engineer working on the DARPA Robotics Challenge. During his time at UWF, Doug participated actively in undergraduate research. This culminated in the presentation of the original project “Natural Language Processing for Home Automation” under the guidance of Dr. Eman El-Sheikh, which was the recipient of the Techsoft Technology Award at the 2013 Spring Scholar’s Symposium; and collaboration on the project “Construction and Characterization of a Nanosecond Nd:YAG Laser Pumped Distributed Feedback Dye Laser Generating Picosecond Pulses” under Dr. Laszlo Ujj, which was the recipient of the iSpace Physics Award at the same Symposium.

Currently, Doug is acting as one of the leads for the IHMC Robotics Lab’s open source initiative, providing an open source platform for developing walking and balancing robots in the hopes of helping to push forward the state of the art in walking and balancing robots. Additional interests include real-time/embedded software development, “DevOps” and software development infrastructure automation, programming languages, and simulation/modeling.