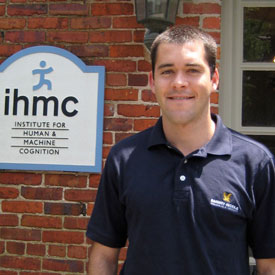 Daniel Duran began working as an intern for IHMC in 2011. He returned upon earning his master’s degree as a research associate. Daniel has been involved in many projects, including artificial intelligence, humanoid bipedal walking, humanoid upper body stabilization, robotic manipulation, helicopter noise reduction using intelligent flight paths and micro-air-vehicle development.

In 2013, Daniel was part of IHMC’s DARPA Robotics Challenge team. He is originally from the Canary Islands, Spain.

He earned a bachelor’s degree in aerospace engineering with a concentration in Astronautics from Embry-Riddle Aeronautical University (ERAU Daytona Beach Campus). He achieved maximum honors at ERAU and minored in computer science and mathematics. HE also earned a master’s degree in software engineering from ERAU.

During his freshman year he begun working for ERAU’s Space Physics Research Laboratories (SPRL). where he performed research on high altitude cusp aurora formations and their relationship to the turbulent wave activity. In his sophomore year, he became involved in Robotics and Unmanned Systems. At the end of his sophomore year he had converted his dorm room into a robotic-controlled room that used fingerprint scanners and facial recognition algorithms to open and close doors. While working in ERAU’s SPRL, he started the first Autonomous Underwater Vehicle (AUV) Team. He led the team for five years, and in that time, he helped make ERAU the first university in the world to compete in all five college robotics competitions from the Association of Unmanned Vehicle Systems International (AUVSI). He developed the mechanical and software design of four different fully functional AUV platforms.

During his master’s work, he performed extensive research on laser-based optical range finder systems (LRFs). This research included the safety aspects of the LRF systems on the automotive industry (i.e. self-driving cars, lane departure detection, best software safety practices etc.) and concluded with the development of a fully functional 2D/3D LASER scanner alternative based on optical triangulation which he presented for his thesis in 2013.