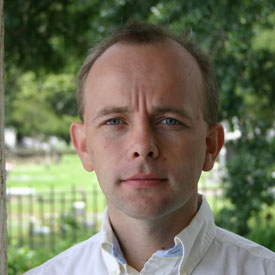 Andrzej Uszok is a researcher at the IHMC/UWF working on ontology and policies for software agent environments.

He received his M.Sc. and Ph.D. in Computer Science from the Institute of Computer Science, AGH Krakow, Poland. His Ph.D. thesis defended in 1996 was titled: Transparent Interoperability in Distributed Processing. Additionally, for two years he studied theoretical mathematics at the Jagiellonian University, Krakow, Poland. He finished the International Business Strategy course at the London School of Economics. Also, he took a course in philosophy at the KUL University, Poland.

Before joining IHMC, he co-founded and was a VP Development of the Seattle/Krakow start-up company Bot.Net. He led a 60 plus team of software engineers working on the novel Internet platform for bots development and execution. The system enables collaboration between companies and optimization of their supply chains. It is based on the Microsoft .Net, XML, SOAP and ontology. He has the US patent (7861252) for the architecture of this agent platform.

His previous experience is both academic and professional. For more than 5 years he worked at the Institute of Computer Science, AGH Krakow, Poland. He participated in many multinational research programs in the area of distributed systems. He taught computer science courses and supervised M.Sc. thesis, one of which won the second price in the XV Polish National Competition for the best M.Sc. thesis in Computer Science in 1998. He also spent some time on sabbaticals at Computer Lab, Cambridge University, UK and at the Department of Computer Science, KUL, Leuven, Belgium.

His professional experience includes working as a consultant for Iona Technologies in the US and Microsoft in Poland. At Iona, he consulted in the area of CORBA-based enterprise distributed system architecture and deployment for numerous Fortune 500 companies. He was awarded with the title of the Professional Services Firefighter of the Year, the Americas 1999. At Microsoft, he advised the banking executives on the Intranet projects, in particular on categorization of information and organization of web documents libraries.

He is an author and co-author of more than 30 research articles and book chapters in the area of distributed systems, agent environments and computer networks, including: