An upcoming segment of The Discovery Channel’s Daily Planet program will feature a new exercise exoskeleton developed by researchers at the Florida Institute for Human and Machine Cognition (IHMC) in Pensacola.

Called the Grasshopper, or Hopper, the device was designed, built and tested as part of a NASA-funded project exploring the use of robotic exoskeletons for microgravity exercise. Because the Hopper uses motors instead of gravity to create the load on the user, the device is suited for use on space missions. Exercise in zero-gravity conditions is critical to maintain muscle strength and bone mass.

The Hopper is designed to replicate the effect of squat exercise with free weights, and its associated loading on the body. To test this claim, the Hopper was brought to EXOS, a leader in integrated performance training, nutrition and physical therapy for professional and elite athletes, the military and innovative corporations. EXOS has a center in Gulf Breeze, Fla., near IHMC.

Noraxon, a company specializing in evidence-based biomechanics, provided sensors and technical analysis to compare exercise using the Hopper versus use of free weights.

The Daily Planet segment was filmed at IHMC and the EXOS center. The show’s host, Lucas Cochran, was instrumented with the Noraxon sensors and coached by an EXOS specialist on how to properly perform the squat motion, both with free weights and while strapped into the Hopper. The data showed that his muscles and heart responded in very similar fashion while using either the Hopper or the free weights. In addition, Cochran reported that the Hopper was more comfortable than free weights for a similar weight.

For more information about the Hopper go to: http://robots.ihmc.us/grasshopper

To see a video of the Hopper, go to http://youtu.be/Akz5K4BXfAg 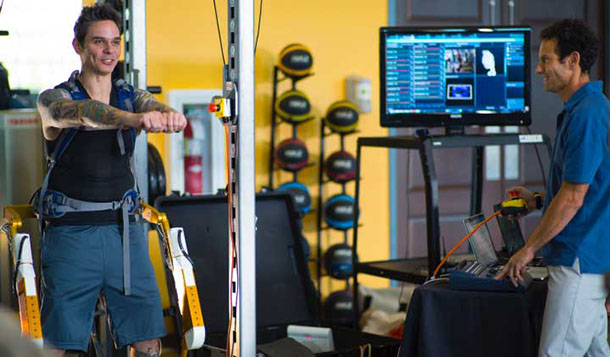