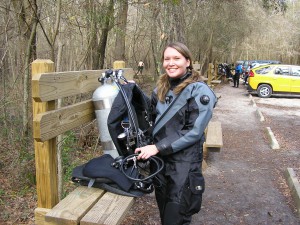 When Dawn Kernagis went to the ocean for the first time as a nine-year-old, she knew that she wanted to explore its depths.

She had just moved from Iowa to North Carolina. “I became completely intrigued by the ocean,” she said. “I wanted to be a marine biologist. I started to read everything I could get my hands on.”

Her parents gave her scuba diving lessons as a birthday present when she turned fifteen, and she would spend the better part of the next two decades in the sea or studying it.

Recently, Kernagis, who is a Research Scientist at the Institute for Human and Machine Cognition (IHMC) in Pensacola, where her research focuses on risk mitigation for divers, was named one of six women who will be inducted into the Women Divers Hall of Fame (WDHOF) in 2016.

The WDHOF is a non-profit, professional honor society that recognizes outstanding women divers who have made substantial contributions to contributions to the exploration, understanding, safety and conservation of the underwater world. The society also provides financial assistance and mentorship to people interested in pursuing diving careers. Kernagis said she will be working on the scholarship committee, which grants 16 distinct scholarships for different types of diving and training each year.

Kernagis has been nominated for the honor before, and says that she has long admired the women in the Hall of Fame. “Some of them are women I’ve looked up to since middle school, when I first knew I wanted to dive.”

Kernagis’ cave diving career began with a cavern dive in Ginnie Springs when she was a sophomore in high school, and she has completed over 1400 dives.

She was a diver and Project Dive Manager for an international dive team exploring Wakulla Springs and the surrounding cave systems from 1996-2007, where she directed several world record-breaking deep cave dives, including the historic connection and swim-through cave dives between Turner Sink and Wakulla Springs in 2007.

Her experiences both in participating in cave dives and managing underwater exploration teams inspired her studies in undersea biomedical research, and her PhD research at Duke University was focused on identifying the role of that genetics play in decompression sickness in divers. In 2008, she was the first Predoctoral Award recipient from the Office of Naval Research’s (ONR) Undersea Medicine Program, and she has since received additional research awards from ONR on diving medical research.

IHMC CEO and Director Ken Ford, in his nomination letter on Kernagis for the WDHOF, wrote, “Through her rare combination of technical diving and scholarly research capabilities, Dawn is leading us into a new field of study at the institute, namely the optimization of human performance, resilience and safety in extreme environments.”

“Her studies have led us to focus on the identification of genetic predictors or markers of stress that may indicate an individual’s susceptibility to undersea threats such as oxygen toxicity and decompression sickness, as well as the development of novel therapies minimize the risk of these hazards affecting divers,” Ford continued.

“Dawn’s work has far reaching implications in that it applies to a wide variety of situations where the brain is responding to extreme environments, such as those encountered by high altitude aviators, astronauts, special operations forces, and elite athletes.”

Kernagis says she has never had a negative experience herself while diving, but “accidents can happen in those environments” she said, adding that proper training is crucial.

Nowadays, the diving that she does is more recreational. Her segue from diver to researcher has been a natural one, and the impetus is rooted in her childhood, she said.

She remembers playing the game “Why” with her father, in which every answer given has a ‘Why’ that follows. “He had the patience of a saint,” she said. “But I genuinely wanted to know. I see science as a different form of exploration. Research is a form of mental and knowledge-based exploration.”

Two other Florida-based divers—Patti Kirk Gross, a marine conservation educator and coral ambassador, and Ruth Petzold, an underwater photographer—are also being inducted into the WDHOF.

The induction ceremony will take place On April 2, 2016 at the Beneath the Sea (BTS) Awards Banquet in Secaucus, New Jersey.