CmapTools, the software used by millions of people around the world to build concept maps, is now available for the iPad. Researchers at the Florida Institute for Human and Machine Cognition (IHMC) have released a new version to the Apple App Store.

“During our testing, the iPad version of CmapTools was particularly popular with elementary and high school students,” said IHMC Associate Director and Senior Research Scientist Dr. Alberto Cañas, the leading developer of CmapTools. “It’s amazing how fast elementary school students got into building the maps, and the speed at which they can build them using the iPad.”

IHMC is a world leader and developer of software for concept mapping, which is used around the world by businesses, schools and universities.

CmapTools has long been available for use on laptops and desktop computers, but the proliferation of the iPad created a demand for adapting the software for the versatile tablet. More than 225 million iPads have been sold since it was introduced in 2010.

“If you are using CmapTools on your desktop or laptop, and also want to build your Cmaps on your iPad, you need a way to move the maps around,” Cañas said. “We created the Cmap Cloud, which enables the iPad to sync the maps with our servers here at IHMC, and provide access to them from a laptop or desktop.

“Many people use concept mapping to brainstorm about ideas; they have a project or a paper to write, and might not be carrying their laptop around, but have their iPad. Just as you wouldn’t write ‘War and Peace’ on an iPad, but would use it for short documents, you want to be able to do your concept maps on it and, once it becomes a larger project, work with it on your laptop or desktop. For that you need complete compatibility in synching between the two.”

Cmap software from IHMC has been downloaded for free by millions of people around the world. The new CmapTools for iPad app is also free, but it will cost $4.99 to access the features that allow the user to sync the iPad version of CmapTools with the Cmap Cloud and export the maps to other devices.

“We want the several million people who have downloaded CmapTools to know there is an iPad version, that they can download it, and that it syncs and shares with the version they’ve been using all these years,” Dr. Cañas said. 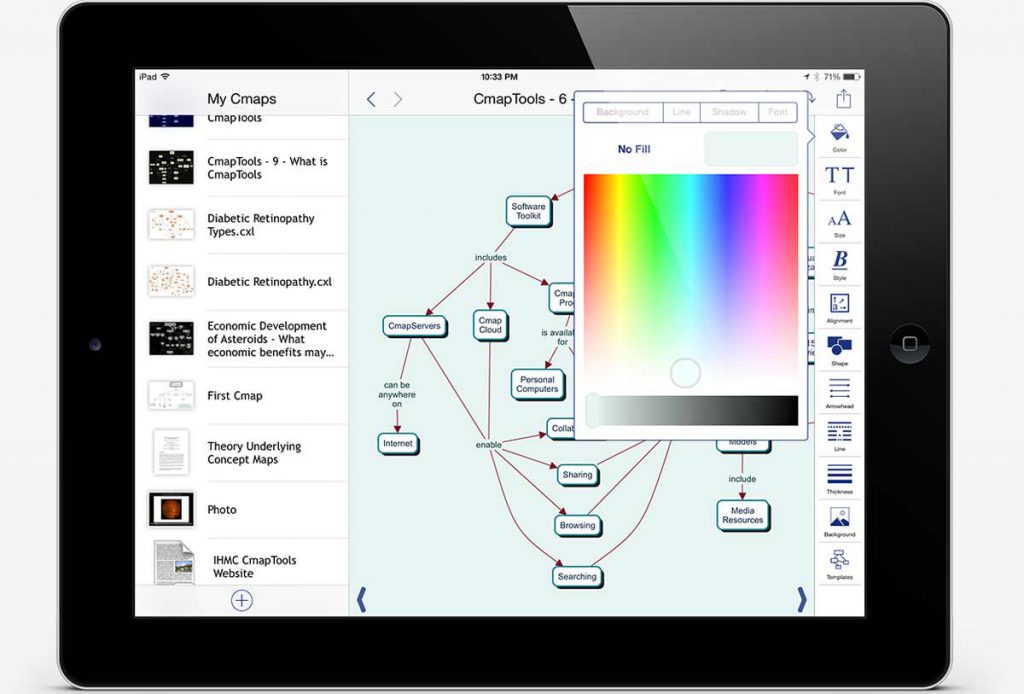