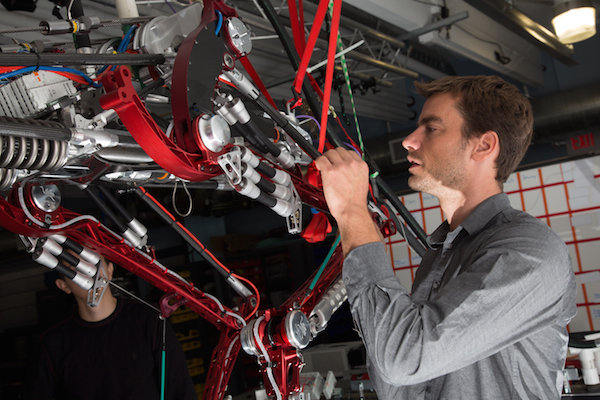 Dr. Christopher Schmidt-Wetekam earned his Master’s and Ph.D. in Mechanical Engineering from the University of California, San Diego, during which time he developed single-legged robots that utilized reaction wheel stabilization in order to enable both wheeled and legged modes of locomotion.

After graduating in 2011, Christopher joined IHMC as a Research Scientist working with Dr. Jerry Pratt on developing control policies in simulation to support the development of the Atlas robot, built by Boston Dynamics. His work focused on the use of upper-body motions for push recovery, and model predictive controllers for sagittal-plane stabilization of a humanoid climbing stairs. Christopher presented Multi-Contact Capturability—a key component of the control of the Atlas robot used by IHMC in the DARPA Robotics Challenge—at the Dynamic Walking Conference in 2013.

Christopher joined the FastRunner project in late 2012. He led the mechanical design of the elastomer spring packs, tendon networks, planarizer and hydraulics.

He works closely with the project founder, Research Associate Johnny Godowski, to develop simulations of virtual HexRunners, and phase-driven oscillators for control of the Planar EllipticalRunner robot.

Outside of work, Christopher enjoys playing piano and drums, as well as windsurfing and kitesurfing.